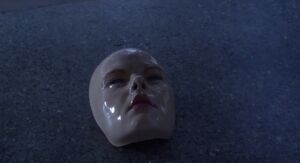 The "Alison" Mask is a mask first seen in "This Is A Dark Ride". It was created by Hector Lime, and was fashioned to look like Alison DiLaurentis. The mask is often used as a disguise by "A", who seems to be obsessed with Alison.

The following people were seen wearing the mask:

Retrieved from "https://prettylittleliars.fandom.com/wiki/%22Alison%22_Mask?oldid=938523"
Community content is available under CC-BY-SA unless otherwise noted.