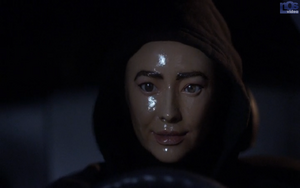 The "Emily" Mask is a mask that first appeared and was created by Hector Lime in "Cat's Cradle". Originally to be used as a Medusa mask, it is now used by "A" to torment Emily.

It was created by Hector Lime to be used as a Medusa mask in exchange for information about the "Alison" Mask. It is unknown if:

In "Cat's Cradle", Hector comments to Emily that her face would be the perfect portrayal of Medusa. He tells The Liars that he would give them information about Alison if Emily modeled for a mask. When they leave, Emily, who was still pulling off bits of clay stuck to her hair, says she bets that was how Alison felt to be buried alive.

In "Under The Gun", Emily sends the video clip of Jenna and Shana dragging Wilden's body to the police station. "A" switched the discs and instead, a video of someone wearing the Emily mask holding a sign saying "Guilty" appears. "A" was later shown hotwiring a car wearing the mask. It is rumoured that the right eye of the mask may be real, showing a light green eye, therefore it could be Jenna.

Retrieved from "https://prettylittleliars.fandom.com/wiki/%22Emily%22_Mask?oldid=905400"
Community content is available under CC-BY-SA unless otherwise noted.