A's Dollhouse is a fully built underground lair belonging to "A". It has exact replicas of The Liars' bedrooms except for Mona's (instead, Mona slept in a replica of Ali's bedroom because "A" wanted Mona to believe she is Ali), making it like a life-size dollhouse with the girls as the dolls. "A" installed cameras in every room and was able to stalk the girls while sitting in her lair. There was also a vocal system installed which told the girls what to do. The vocal system is installed to speak four languages: English, German, French, and Spanish. The dollhouse was first shown in "Welcome to the Dollhouse", the episode when the Liars, except Alison, were kidnapped and brought into the dollhouse. The Dollhouse consists of thirteen (known) rooms and an electrical fenced in "backyard".

It is located in/under Tyler State Park in Bucks County.

Just as the rest of the Liars, Aria woke up in an exact replica of her bedroom, locked inside. The room consists of plastic books as well as cement in closet. She had to pretend that it was her real bedroom just as all the other Liars had to, otherwise they would receive a form of torture or an ear piercing siren would go off. It only opened when "A" allowed it or when the electricity fell down for 3 minutes daily.

When Hanna first woke up in the replica of her room she thought she was home. However, it turned out that she was in A's dollhouse. Just like all the other Liars, she was only able to open it when "A" allowed it or when the electricity fell down.

As all the other girls' rooms, Emily's room is an exact replica of her bedroom. Emily had to pretend it was her real bedroom as well.

For Spencer's room counts the same as for all the other rooms. However, Spencer threw a chair against one of the windows in the replica of her bedroom following the glass to break down and revealing cement walls and that she was trapped underground.

Unable to kidnap Alison, "A" kidnapped Mona in "Taking This One to the Grave" who had to pretend that she is Alison. After helping Mona fake her death, "A" kidnapped Mona and held her in the dollhouse for over four months. Mona is mostly seen with an Alison Mask on, to maintain the illusion of being her.

The dollhouse also includes and exact replica of Alison's bedroom where Mona Vanderwaal, pretending to be Alison, had to reside in. Ultimately, A planned to have Alison "move in" and most likely get rid of Mona in the process.

There is an unnamed room which takes place in a basement of sorts. This is where "A" set up stations where the Liar's had to plan out his prom he had theoretically missed out on. The Liars attended the "Demented Prom" where Mona, playing the part of Alison, was named Prom Queen while Spencer, Aria, Hanna, Emily and Mona named Charles prom king when they were planning on escaping the dollhouse and get away from "A".

The "Prom" they were forced to play, was a remake of the prom Melissa and Ian attended seven years ago ("A Night at the Opera"). This hints that Charlotte went or wanted to go to that prom too.

As the Liars were having "Tea Time", "A" chimed a bell indicating it was time to play a game. Mona led the Liars to a Game Room, which resembled a little child's toy room, and sat them down at a table. The game they played was a popular old game, Mystery Date. When the Liars opened two of the doors, Caleb and Ezra had their pictures in the game from the Ice Ball way back in "How the 'A' Stole Christmas", which Charlotte got while she attended the Ice Ball. This is where Spencer found the blocks that spelled out "Charles".

The Vault is a room in which are kept A's most precious and treasured things. When the electricity to the dollhouse was cut, Spencer went into the room to have a look around. There were photos of Jessica DiLaurentis/Mary and two little boys, Jason and Charlotte/CeCe. After Spencer found a video, it's revealed Jessica and someone unknown (assumed to be Kenneth) took the boys to the Campbell Farm to go apple picking. Charlotte found Spencer watching that video and they had seemed to have a little confrontation before Mona came into the vault and scared Charlotte off. After she had picked up a photo of a boy, she stated that The Vault was nothing like she thought it'd be and that "A" actually has a soul.

In "Game On, Charles", all of The Liars (excluding Mona) go into the lair when the main generator shut down. They burned The Vault down in order to find Mona and escape - which they succeeded in.

The dollhouse also owns a morgue. "A" placed Emily, Aria, Spencer, and Hanna here after he had put them to sleep. They all woke up without clothes and white blankets over them. According to Mona, they slept about 3-4 hours inside the morgue. Later on, it's revealed A knocked the Liars out in order to place GPS microchips inside the back of their necks, allowing the Liars' every move to be tracked outside the Dollhouse.

The Hole is a pit dug into the ground. It's in a single room and "A" took Mona there and left her without food and water for days. There's a rope inside, which The Liars used to pull Mona out with. It served a sort of threat to the Liars in case they didn't go through A's games.

Sara's Room is a hidden special room through which somebody is able to look at the hallway. It has a simple bed in and sand all over the ground. Sara had spent almost three years in that room and painted a white tally mark on the wall for each day she spent there. However, this was later confirmed to be a ruse, as she was working with Charles as Red Coat and the Black Widow.

Chimes and their meanings

The vocal system installed in A's dollhouse is also able to play different sounds; one of them is a chime that has different meanings depending on how often the chime was played: 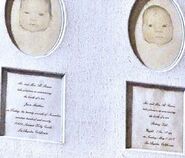