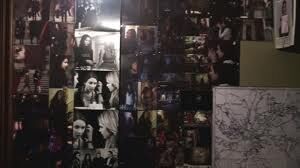 A's lair is "A's" base of operations. It is where "A" would go to think of plans, send texts, create messages, and find ways to torture the girls.

unmAsked In the Season 2 finale, it is revealed to be located in Room 2 of the Lost Woods Resort. The room contains pictures, newspaper clippings, and dolls resembling the girls and Alison. There is a hole in the wall, behind a picture frame, so "A" could watch Alison in Room 1 next door. This is where Spencer figures out Mona is "A," due to the gum wrapper and cashmere sweaters. It is also where Mona reveals herself to be "A" and knocks Spencer out.

It Happened 'That Night' In the Season 3 premiere, it's revealed that when the girls came back to the lair the morning after the masquerade ball, the room was empty. They didn't tell Emily about it until 5 months later. Over these months, Spencer had been visiting the empty room in order to create a computer-generated 3D representation of the way it had been when she first saw it. The Remains of the "A" The new "A" (Big A) searches for a new place to create their lair when they circle a classified ad for a room for rent. The Kahn Game At the end, "Big A" rents the apartment (Room A). What Lies Beneath "Big A" moves in at the end. The Lady Killer The new lair, complete with all the photos and paraphernalia taken from Mona's Lost Wood's lair, is revealed when Mona is seen talking to a new member of the "A-Team". Dead to Me It is revealed as apartment A in a block of apartments on Mayflower Hill. Spencer finds the second lair, but "Big A" has realized that the Liars now have the key, and has relocated, leaving the room empty. Will The Circle Be Unbroken? "Big A" is seen looking at a poster of Rosewood's Carnival at Rosewood Town Center, then closes their laptop and opens the blinds of a mobile home and then drives it throughout Rosewood. a dAngerous gAme We see two (now former) members of the "A-Team", Mona and Spencer, in the mobile hideout of "Big A".

'A' is for A-l-i-v-e Big A's lair is still a mobile RV and Mona takes the Liars there. She and Hanna hide it later, but Toby takes it to "Big A" in exchange for information about his mother's death. A lady in black is later seen in the RV. Bring Down the Hoe CeCe is in an apartment talking to someone, on the phone, and waiting for them to arrive. She tells them she will not come back to Rosewood. Now You See Me, Now You Don't Red Coat (Alison) leads Spencer to an apartment in Ravenswood, it is the same apartment where CeCe was earlier. Later in the season is revealed that this isn't Big A's lair. It is just a room used by Ezra to research Alison for his book.

Miss Me x 100 "Big A" comes back to Rosewood and moves their lair to an apartment building while the Cavanaugh house is blown up. Welcome to the Dollhouse The Liars find themselves in an unknown location that looks like a bunker turned into a dollhouse, where most rooms look like their old rooms. They also find Mona alive and a vault with Big A's personal belongings. The police find a new lair in the basement of the Campbell Barn. Tanner and Toby discover it and see the girls trapped in the dollhouse, on their computer monitors. The farm was set up by "Big A" to frame Andrew so the police would chase him instead of them.

Retrieved from "https://prettylittleliars.fandom.com/wiki/A%27s_Lair?oldid=1024344"
Community content is available under CC-BY-SA unless otherwise noted.