Alison's Yellow Top is the top that Alison was wearing the night she went missing.

In "A is for Answers", it is revealed that Alison's mother bought the top for Alison from Neilan's Department Store. Jessica gave the top to Alison the day she disappeared. Alison wore it for the rest of the day and into the night.

It is currently unknown as to where Alison's top is, but it can be presumed that she left it at the Lost Woods Resort with Mona Vanderwaal when she changed into her Vivian Darkbloom attire to go undercover and hide from 'A'.

In "Turn of the Shoe", Mrs. DiLaurentis reveals that the yellow top was all she had to see to know that the body found underneath the gazebo was Alison's. However, in "Original G'A'ngsters", it was revealed that Jessica knew Alison was alive, so it is currently unknown as to why she identified the body as Alison's.

Alison wore the top again in "Game Over, Charles" when she played along with A's game in order to find the kidnapped Liars. A made her change into the exact outfit she wore the night of her disappearance. This was the last time that Alison wore the shirt.

In "What Becomes of the Broken-Hearted", Jason told to Emily that he saw Charlotte on the night Alison disappeared. She was wearing a similar yellow top while speaking to Melissa Hastings. Jason at first mistook Charlotte for Alison as they looked identical. This memory has been doubted, however, as Jason was drunk and high that night.

"Game Over, Charles" that whenever Jessica would buy clothes for Alison, she would buy an identical set for Charlotte, almost like they were twins. Jessica gave Charlotte the same yellow top sometime before the events of that night. The top was later stolen by Bethany Young, who disguised herself as Charlotte to escape Radley since Charlotte had out-privileges. Charlotte also told Alison that Jason had either seen Melissa or Bethany, or the combination of alcohol and drugs in his system caused a hallucination.

When Bethany discovered that Jessica DiLaurentis was having an affair with her father, Bethany wanted revenge and planned to kill Jessica. She stole Charlotte's yellow top to disguise herself as Charlotte, as she had out privileges to attend school and Bethany didn't. She then snuck out of Radley.

Upon her arrival at the DiLaurentis house, Bethany was attacked by Mona Vanderwaal with a shovel. Mona had mistaken Bethany for Alison since they were dressed identically. The yellow top also allowed Bethany to be mistaken for Alison by Melissa Hastings, who buried Bethany alive to protect Spencer, whom she believed had killed Alison.

When Mona Vanderwaal was abducted by A in "Taking This One to the Grave" she was taken to A's Dollhouse and forced to dress and act like Alison. Charlotte wanted a stand-in for Alison until she could get the real thing, which meant that Mona had to look like Alison. Charlotte forced Mona to wear a yellow top identical to Alison's and dye her hair blonde. There were also a number of these tops in "Alison's" closet in the Dollhouse, so Mona could change from one to another. Mona was finally able to remove the shirt after the events of "Game On, Charles".

In "Game On, Charles", Sara Harvey, a teenage runaway who was kidnapped years ago and believed to be dead, is discovered in A's Dollhouse. Sara was wearing the yellow top and dressed identically to how Alison and Mona were also dressed at the time. Sara was believed to have been held as a prisoner in A's Dollhouse and was the "first Alison" before Mona and the Liars arrived. Charlotte allegedly forced her to pretend to be Alison. After many months, the yellow top and Sara's rescue is later confirmed to be a ruse, as Sara was actually a member of the A-Team and Red Coat. 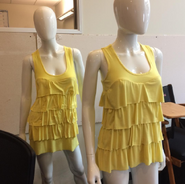 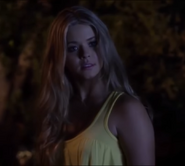 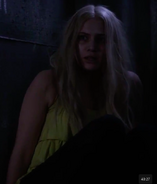