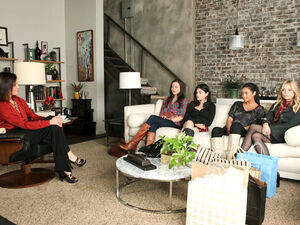 The office is located on Main Street next to a pizza place and bike shop.

Both Dr. Sullivan and her office are first seen in "It's Alive" during her first session with the Pretty Little Liars. In her office, Spencer, Aria, and Emily sit silently. Hanna walks in late, hoping to have missed the whole, but to her annoyance, the girls have ‘politely’ waited for her. When they finally do get to talking, they speak minimally. Aria is the most tempted to confide in the inviting Dr. Sullivan, especially about that thing, but their cellphones go off, scaring them with reminders of "A" finding anything out. They leave, thereby leaving Dr. Sullivan completely in the dark. Later, the girls return to Dr. Sullivan’s office, this time ready to tell all - until they catch sight of Ezra’s Bachelor certificate on the wall, a subtle hint from "A" that she is privy to everything they say. They had scheduled the appointment impromptu, yet they suddenly cancel, leaving Dr. Sullivan completely baffled and frustrated with the lack of communication. She had noticed that their decision to turn back, once on the brink of telling her, stemmed from one of the girls and slowly spread to the other four, but can’t figure out why. She believes that the girls are frustrating their attempts at therapy by coming as a group, never suspecting the compromised privacy of her office. Hanna has an impromptu session with Dr. Sullivan here in "Blind Dates" (where she lets go of her feelings about Alison that have haunted her until that point). But, someone else must have anticipated the meeting, because the office is ransacked shortly after. A note warning Dr. Sullivan about the dangers of nosiness is included. In "I Must Confess," the girls confess that someone known only as "A" has been terrorizing them since before Alison's funeral in Dr. Sullivan's office. That night, Dr. Sullivan returns to her office after hours and goes through her patient files, thereby coming to the conclusion that she knows who "A" is. All the while, she is being watched by the black hooded figure from outside her office window. She informs the girls to come meet her in the office to find out the identity, but when the girls arrive, she is predictably gone. It is revealed beyond a doubt that Dr. Sullivan's office had been bugged in "I Must Confess." "A" is seen removing a sound recording device from beneath a bobble head Freud adorning a shelf of Dr. Sullivan's refurbished office. "A" must have planted the device there during one of her sessions with Dr. Sullivan. One such session was seen at the end of "Touched by an 'A'-ngel," when Dr. Sullivan had commented on how suddenly chilly her office was.

In "Dead to Me," Emily meets with Dr. Sullivan. She says: "not talking isn't working." Emily is having trouble dealing with the fact that she killed somebody, even though it was in self-defense. Dr. Sullivan suggests hypnotherapy to help her reframe the problem that is controlling her life. Emily's up for it. During Emily's hypnotherapy session, Dr. Sullivan asks her what happened "that night," referring to the lighthouse. Emily repeats Dr. Sullivan's words ("that night") and draws attention to how ambiguous the question sounds. Emily says she sees "her." Dr. Sullivan assumes it is Paige, but it is shown to be Alison. Alison says "we shouldn't be here" and "it's dangerous" among other things. Under hypnosis, Emily grabs a shovel and hits a frightened Alison with it. She wakes up and leaves immediately.

Anne in her element

The Liars leaving Dr. Sullivan's office
Add a photo to this gallery

Retrieved from "https://prettylittleliars.fandom.com/wiki/Anne_Sullivan%27s_Office?oldid=864646"
Community content is available under CC-BY-SA unless otherwise noted.