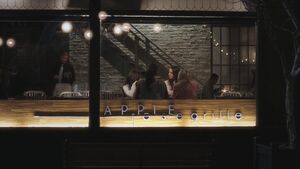 Apple Rose Grille, better known as The Grille, is the local Rosewood restaurant where the girls frequently hang out when they want a bite to eat. They went there often in Seasons 1 and 2 but have only been there a few times since.

Toby, before leaving school to get his GED, liked to study at the bar there. The Grille has made many appearances throughout the series. Apparently, the Grille is sophisticated enough for Peter Hastings' tastes and simultaneously casual enough for the girls to frequently hang out here. It first appeared in The Jenna Thing.

The girls are seen here as early in the series as "The Jenna Thing." When Jenna enters the restaurant, they all leave. Spencer goes to the Grille twice in one episode when she returns there for dinner and drinks with Peter, Melissa, and Wren. She also bumps into Aria at the Grille, who is picking up takeout - typical for the Montgomery family. During dinner, Wren and Spencer flirt, as he orders her choice drink, a Vodka soda, and is able to offer discreet sips of the clear and colorless liquid when her family members are distracted. In "Can You Hear Me Now?," Hanna visits the Grille for her second dinner date with her father. She sits with him and chats warmly until she learns that they won't be dining alone and also that she has a future step-family, including her dining companions for the evening, Isabel and Kate. Everyone behaves politely towards one another, but there are some awkward moments for Hanna. In "Reality Bites Me," Emily and Toby's surprising friendship grows stronger, and during chemistry lab. she asks him where he was the night before, not really believing Spencer that he was the one who wrecked his vanity. His alibi is the Grille, where he claims he does all of his studying and also closes the place on a nightly basis. Emily is intrigued and agrees to meet Toby there later to hang out. However, when Emily arrives at the cafe, she sees Spencer and Hanna. Too embarrassed to socialize with Toby in front of them, she reluctantly blows him off. Later, the waitress hands Emily the mixed CD Toby has left for her. The next day at the Grille, an upset Toby tries to ignore Emily when she comes to sit with him at the bar, but gives in when she presents him with a mixed CD of her own. She apologizes for blowing him off, and he accepts. In "Keep Your Friends Close," Aria lunches here with Ella and reconnects with her mother, who is currently living atop her gallery. In "The Badass Seed," Byron takes Ezra here for drinks, where Byron is much more friendly towards Ezra than he had been previously. He offers to help Ezra procure a job at Hollis College, where he can focus more on his writing and calls Ezra gifted. The two talk about Aria here as well. In "Monsters in the End," the girls chill here at the beginning of the episode. Spencer gets the sense that someone is watching her. The girls reassure her that it's just some clowns for the Rosewood Founder's Day Festival, which Spencer finds creepy all the same. At the end of the scene, the girls seem to be proven wrong as someone stealthily moves between the mannequins. (So, "A" hangs out in the Apple Rose Grille, too?) The Grille is shows for a second time in this episode when Emily offers to go along with Paige to meet with a local gay support group. Paige stands Emily up, so Emily meets Samara, the girl from the support group, alone here.
Hanna confronts Mona about her destroying Caleb's love letter in "It's Alive," just before her date with Noel at the Grille. When Hanna leaves, Noel detects something wrong, and Mona just sulks. Fittingly, the two later make up here, while Mona is sitting at the bar. The girls meet Jessica DiLaurentis here, when she asks them to model Ali's clothing for the fashion show in "Never Letting Go." Jessica makes a comment about the menus being redone. In "Touched by an 'A'-ngel," Jason finds Aria here and sits down beside her to present her with the framed photograph of Aria sleeping, supposedly taken by Alison. Aria's qualms about Jason are alleviated as they talk, and he explains how he came about the roll of film; it had been hidden in a box under the floorboards of Alison's room. He had discovered after beginning renovations on the room. Aria becomes so comfortable around him, she even accepts his offer to accompany him back to his house, where he can show her the rest of Alison's hidden belongings. Spencer and Toby walk by the Grille at this moment and catch sight of Aria with Jason through the restaurant window. She resolves to tell Ezra that Aria is in danger, so that he can convince her to stay away from him. In "I Must Confess," Maya meets Emily for the first time in months at the Grille, where they share an intimate candle lit dinner for two. Apparently, Maya is out of rehab and is now living some forty-five minutes away from Rosewood with her parents. Emily and Maya catch up over dinner, and Maya is happy to hear that Pam has eased up on Emily, trusts her again, and is more accepting of who she is. In "The First Secret," Officer Darren Wilden drives Ashley home after she has one too many martinis at The Grille. After Maya is no longer returning Emily's countless phone calls, Emily think she spots Maya in The Grille. When she taps the person on the shoulder, she is embarrassed to find that she was approaching someone else. After confronting Jason about who his biological father is, Spencer goes to dinner with in Apple Rose Grille. The atmosphere is friendly until they start arguing about whether Mr. Hastings was likely to have paid Alison to keep quiet.

In "The Kahn Game," Caleb under A's disguise,tricks Hanna into meeting him outside the grille. In "I'm Your Puppet," Caleb, Hanna and Jamie have a dinner, and Jamie gives Hanna an angel chain, to Hanna's distrust. In the same episode Ezra and Aria are in cricket after Aria found Malcolm at the festival. She prefers to be considered that they should end their relationship.

Retrieved from "https://prettylittleliars.fandom.com/wiki/Apple_Rose_Grille?oldid=533133"
Community content is available under CC-BY-SA unless otherwise noted.