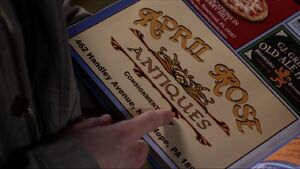 In "That Girl is Poison," Spencer recovers a note from Mrs. Reynolds' hospital room with the name April Rose written on it. At first she believes it is a name, possibly the name of one of the girls Ian set up for the N.A.T. Club. Jason doesn't recognize the name, so Spencer keeps searching.

In "The Remains of the 'A'," Spencer sees an advertisement in the back of an old school yearbook. It turns out April Rose is the name of an antique shop in New Hope, Pennsylvania. Spencer and Jason go there hoping to find evidence confirming Garrett as Alison's killer. They spot an anklet hanging on a mannequin and Spencer flashes back to the first time she saw Ali wearing it. Jason pays off the man in the shop to let them keep the anklet and they bring it straight to the police station.