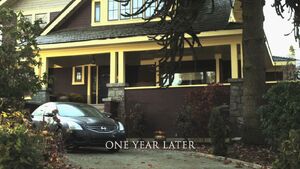 Aria's house is across the street from Hanna's House as revealed by a conversation between Byron and Ashley in "The Perfect Storm."

Rachel Kamerman, set designer for Pretty Little Liars, has said that her inspiration for creating Aria's room was influenced by Aria's character: vintage, a goth past, and a romantic personality, as well as her love of literature. Therefore, Kamerman placed vintage pieces around Aria's room, as well as a backstory love of butterflies, with books everywhere. Keeping in mind that Aria does not come from the same economic background as Spencer does, she used second-hand pieces and flea market finds.

The childhood pictures of Aria are really of Lucy Hale when she was younger.

Retrieved from "https://prettylittleliars.fandom.com/wiki/Aria%27s_House?oldid=1023561"
Community content is available under CC-BY-SA unless otherwise noted.