AssociAtion is the sixth webisode of Pretty Dirty Secrets. It aired on October 2, 2012.

Shana is shown texting on her phone, and then puts it down on the counter at the Rosewood Halloween Spooktacular Store and walks away. We then see her messages, with some being from her family. There are also some from a Blocked ID. Her call log appears on the screen, showing missed calls from a blocked ID and Paige. It is unconfirmed if it was Paige McCullers or not, however after it was revealed in Season 3B that Shana and Paige once dated, so it seems likely. Photos of some of the Liars' Halloween costumes are shown, and are followed by a playlist of the songs featured in "The Lady Killer." 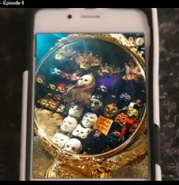 Close-up of photo on phone