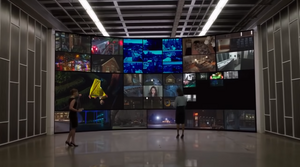 Beacon Guard is a security and surveillance system owned and operated by Hotchkiss Technologies. The system originated and is based in Beacon Heights University, where it keeps students and faculty safe. The system is noted to have numerous active security cameras around Beacon Heights.

After witnessing the traumatizing shooting and death of her father, Taylor Hotchkiss became obsessed with protecting others so they never had to experience a similar event. She threw herself into coding the perfect program, growing manic to the point where she couldn't eat or sleep. Claire, now worried about her daughter, had Taylor admitted to a "wellness spa". Claire took control of Beacon Guard and eventually locked Taylor out of the system. While Taylor could live with that, she soon discovered that someone from within Hotchkiss Technologies was using Beacon Guard to spy on a select group of people.

Additionally, the system had become a well-known name within Beacon Heights. Beacon Guard is also a home security unit, campus patrol, and private cameras. The quantity of security cameras everywhere is unclear, however, there are several units located inside the homes of Claire's staff, as well as, around campus.

To the public knowledge, Beacon Guard was founded by Claire Hotchkiss shortly after her husband's murder. Her obsession with keeping her students and faculty safe was channeled into Beacon Guard. It grew exponentially when her daughter seemingly died.

In "Pilot", Alison was introduced to Beacon Guard after she noticed a security system in her new house. Mona pointed out that it was the school security system and was used to keep all of the students and faculty safe since Taylor's death. Nolan later navigated his way around Beacon Guard with the help of a scanner on his phone. The scanner alerted him when he was out Beacon Guard's range. This navigation system was designed by Taylor Hotchkiss specifically to find a safe time for Nolan to escape BHU and visit her. Taylor mentioned that Beacon Guard began updating its system every half hour making it even harder to find outages in the system.

In "...If One of Them is Dead", Alison dismantled her Beacon Guard system by pulling it off the wall and unplugging it, an action that she wasn't supposed to take per BHU's emails to her. Later that day, Dana Booker, who now has access to all of Beacon Guards files from the beginning of its creation, shows Claire Hotchkiss her latest discovery. She shows video footage of the Perfectionists meeting outside of Thorne Hall twelve-minutes before Nolan was killed. Mona later informed Alison that Beacon Guard suffered an outage in the area surrounding Thorne Hall at the time of the murder.

In "Lost and Found", Mona agreed to head to Taylor's RV in case she returned. While there, Mona noticed that the table she sat her glass on was vibrating. After following wries she discovered a hidden compartment in the cabinets that had a computer and keyboard. The computer was signed onto Beacon Guard. She used the system to search for Mason Gregory, herself, and the Hotchkiss'. She discovered a classified file under "BH-00004" that sparked her interested. On that same night, Dana Booker claimed that Beacon Guard had captured Mason Gregory on camera attending a party the night that Nolan was killed. Alison's unit was also seen.

In "Lie Together, Die Together", Taylor confides in Alison that she was the one who created Beacon Guard, not Claire. After witnessing her father's murder, Taylor became obsessed with keeping everyone else in the town safe. Claire took the project away when Taylor became manic and had her locked out of BG. Taylor explained that someone later hacked into Beacon Guard and began using the program to spy on select few individuals. Later in the episode, it is shown that someone is using Beacon Guard to compile a list of several people for unknown purposes.

In "Enter the Professor", The Perfectionists had believed that footage of them at the lake conspiring to cover up Taylor's shooting of Jeremy was belonging to Beacon Guard, however, they later determined this to be false. When The Perfectionists along with Alison and Mona attempt to use Taylor's BeaconGuard to find out who The Professor is, the RV is blown up, destroying all access to her system. Later on, various cameras around Beacon Heights are hacked by The Professor where The Perfectionists state what they are afraid of.

Add a photo to this gallery
Retrieved from "https://prettylittleliars.fandom.com/wiki/Beacon_Guard?oldid=1021764"
Community content is available under CC-BY-SA unless otherwise noted.