Start a Wiki
Believe is the third episode in Season 1 of Ravenswood. The episode aired on November 5, 2013.

The episode starts out with Miranda in her coffin, and Raymond examining her. It shifts to everyone gathering at her funeral. Caleb is getting dressed in a tux, and him and Miranda talk about how she's still stuck. Caleb tells her their in this situation together.

At the funeral, Luke and Olivia's mom notices the spray painted "Black Widow" on the tombstone, and the officers watching her. Remy arrives, and her and Luke make eye contact, before shortly breaking away. Olivia notices a girl with blonde hair, by wear the black widow sign is. Raymond starts speaking about Miranda, while she is contradicting everything he says. Her coffin then begins being buried in the ground, and Miranda asks Caleb, what if she disappeared forever and pleads for him not to let go. Everyone begins looking up, as many ravens are flying around. Miranda then disappears.

Now, everyone inside Remy goes over to Caleb, and said it felt right being there, as they were all in the car with her. She also believes it's part of the pattern, and there should've been five coffins. Dillon pulls Olivia away, and asks if she wants to leave, since she's dealing with so much. She says she's fine and is just sad that Miranda is gone. Remy makes her way over to Luke and they have a conversation about their families and the recent events. Luke tells her he misses her, and Remy asks if him and Olivia can meet her and Caleb at The Vault. They part ways when Remy spots her dad, and Luke tells her he'll be there. Zack is then shown talking to a woman about Miranda, when Caleb interjects. He then gives a touching speech about Miranda.

Olivia and Luke walk out, and see their mom arguing with an officer. Luke asks Clark to ask his boss to tone it done with their mom. Clark informs Luke and Olivia that they are investigating a person of interest, which think is their mom. Clark also says, that they have information from witnesses, about their mom and dad arguing over a woman named Abby, and thinks her and their father were involved. Clark then leaves, followed by Luke, while Olivia says she'll get a ride with Dillon. She goes into the bathroom and starts bawling at the thought of her father cheating. Kneeling down to get her purse, she starts taking deep breaths. Unbeknownst to her, a hand comes out of the vent, but is interrupted when Dillon knocks on the door.

At the graveyard Miranda comes up behind Caleb and they talk. They go to meet Remy, but Miranda can't get passed the gate. She tells Caleb to go on, and she'll always find him. At The Vault, Remy tells Luke and Olivia about the patterns her and Caleb found. Luke responds logically, stating their were other people who died. Olivia reassures Remy she's not shooting her down, but she just has to go, and leaves. Luke follows and they talk about how they think Abby is a suspect. He goes back to Remy, and tells her he wants to talk about this, but Olivia needs him. Before leaving Remy tells him to be careful, and says to her and Caleb there's one flaw in their theory-- they didn't all die. Remy starts to second guess herself, but Caleb tells her he sees it too.

Olivia and Luke are looking through their dad's laptop to try to find any connection to Abby. Their mom comes in and they confront her about Abby. She avoids the subject, but finally says Abby was their dad's girlfriend in high school. She also mentions that Abby was trying to contact their dad and warn him, because of his suspicions of the town. Luke asks if they were sleeping together, and she responds Abby has been dead for over 20 years.

Back at Remy's house, her and her mom talk about this morning and she's sorry for not being there. Remy's mom talks about how she lost lots of friends, but never went to the funerals. Remy tells her it's okay, she's home now. Her mom responds with safe in Ravenswood. At that moment a car alarm goes off, scaring her mother into dropping a knife, which would've stabbed Remy's foot, if she hadn't moved it.

At the house, Caleb approaches Raymond, since Ray asked to speak with him. He thanks Caleb for what he said at the funeral, and wishes he could've said something more, but didn't feel he earned if. Caleb tells him he really didn't. Raymond leads him into a carriage house, and asks if he wants to stay, as long as he helps out. Caleb accepts, and they shake on it. When he walks out, Miranda appears once more saying she doesn't get Ray has room for him, and not her. They open a trunk and find things that belonged to her mother's things, and hopes her mom will find her and guide her to the other side. Miranda is frustrated that she is unable to connect with anything, and disappears to a secluded hallway.

Ms. Grunwald walks passed Miranda, but stops when she feels her presence, but continues on. Miranda touches her mom's picture and the lights flicker. She begins to panic when she hears voices whispering.

Caleb is in his room, when Hanna texts him that she misses him. He texts back he does too. Miranda shows up sitting by the window and Caleb asks her where she was. She says she was in the hallway, where she gets stuck in a limbo. She says she wasn't alone, and tells him she thinks it was other spirits, but they didn't want to be friends.

Remy is getting her backpack for school, when she hears something. She walks over to her dad on the computer watching some kind of explosion. She begins asking a lot of questions, and her father says her mother doesn't know he has it. She thinks her mom should see it, while her dad says it would be better for her if she didn't.

Olivia is looking through a yearbook for Abby. When she finds her, she realizes that's who she saw at the graveyard. She goes to the school science lab that was donated by her father. Olivia walks around then leaves, but not before hearing voices. She goes back and looks through the door, where a bloody face pops up.

Luke is at home, making dinner, when Olivia walks in. She tells Luke she does think Abby was trying to contact him, and Luke asks how could she know. She informs him that she thinks Abby is now trying to contact her. Luke's expression is confused, when he tells her Abby is dead. Olivia tells him what she saw at the funeral, and how she went back to the lab. She also tells him she thinks Abby is part of Remy's pattern, like them. Luke still doesn't believe it, and Olivia tells him she can't do this alone.

While Remy's parents are talking on the couch, she makes her way over to her dad's area, and picks up the file about her mom's ambush. Remy reads what happened, and can't figure out how her mother survived. Caleb texts Remy, that he needs to talk to her.

Remy and Caleb are walking down the street and Remy thanks him for believing her. When Caleb is about to tell Remy about Miranda, Olivia and Luke come up. Olivia tells them she's ready to talk now.

They all are in the carriage house, and Caleb tell them Miranda is still here. All are confused, and Caleb says he's seen and talked to her. Remy, while trying to understand, asks if he's meaning her ghost. He says yes, and that he's telling them, because Miranda needs help, and she's stuck here. Remy and Olivia believe him, while Luke doesn't. While Caleb, Olivia, and Remy are talking about Remy's mom and Abby, Luke is in disbelief that they believe in this. Olivia is recreating a Ouija board, out of a whiteboard and magnetic letters, while telling them she thinks her dad found the same pattern. Olivia also tells them she thinks Abby is trying to warn her, while Luke contradicts saying they survived the crash. Caleb tells him its not over. Olivia is ready for a séance.

Remy and Caleb are turning off the lights, and Miranda comes up behind Caleb saying she has a bad feeling, and doesn't think the spirits want to help. Caleb sits down with the others, and they all place their hands on a disc. Olivia is explaining who she is, and they get no answer. They take their hands off, as a sound emerged. Caleb gets up and opens the door to find nothing. He then walks out.

Luke thinks they should wait for him to come back, but with a look from Olivia and Remy, reluctantly puts his fingers back. Olivia tells Abby if she has something to say, say it. Miranda hears whispering and asks if they heard it, but Caleb was the only one who can see her, so they didn't. Miranda yells for the whispering to stop, and is transported back to the hall. Some kind of force pushes her, and she frantically asks if Abby is there. She pleads for Abby to make everything stop, and it does. A phone then starts ringing. Miranda gets up and walk toward it. It shakes and falls over by itself. She stops to listen to it, and a voice is heard at the other end. Miranda tells Abby to talk to them.

Back at the house, Olivia asks Abby if she's there, and their fingers move to "YES." Miranda is back, and Olivia asks if her father discovered the curse. It goes to "YES" again.

Caleb is outside, and sees Zack coming out from the woods. Zack tells Caleb he worked there for a week and couldn't even put his lunch in the fridge, and Caleb is here a week and gets the keys to the kingdom.

Olivia asks Abby if her father is with her, and it goes to "NO." She then asks is the curse what got her father killed, and goes to "YES." Miranda sees the chandelier cracking, and water shaking. She tries to tell them their making a lot of noise on a bad frequency, but they still can't hear her. Miranda yells for Caleb, and when he hears her he runs back in.

Olivia asks if her father's killer trying to kill them, and it goes to "YES." Caleb runs back in, and the door shuts and locks by itself. The windows do the same thing. Luke says he'd done, but Olivia and Remy still want answers. The letters say FIVE, and Miranda tells Caleb he needs to shut this down, upon her seeing the light fix will fall, but Caleb shuts her out saying they need answers. The letters then say PACT, making the phrase FIVE PACT. Miranda sees the light about to fall and runs over saying look out. She flips over the board, making all jump back when the light falls.

The episode ends with Miranda glowing and Caleb smiling at her. Surprisingly though, Remy says Miranda? All look in the direction Miranda is, and they all can now see her. Ms. Grunwald and Raymond are talking, and he asks her if Caleb is having a party. She respond with he has guests over, perhaps the kind he shouldn't be inviting. 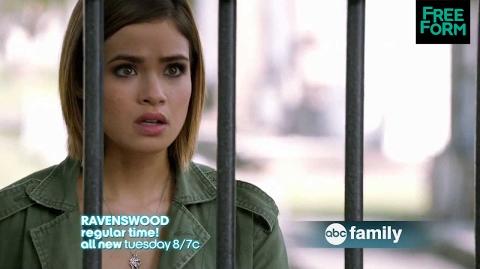 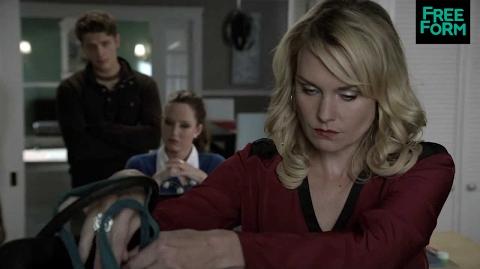 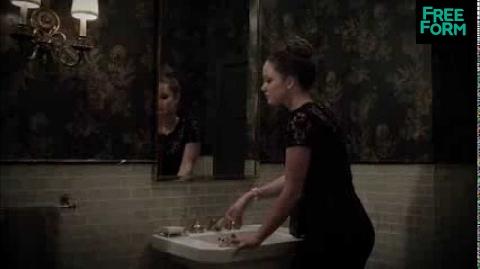 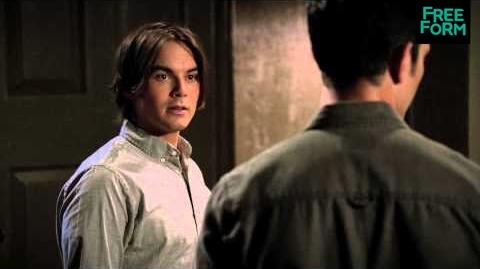 Retrieved from "https://prettylittleliars.fandom.com/wiki/Believe?oldid=1010146"
Community content is available under CC-BY-SA unless otherwise noted.