Cape May, New Jersey, is the destination where many Rosewood residents go on vacation, as it is known for its beach-party vibe. It is first mentioned by Jenna in Season 2, and again by CeCe Drake in Season 3. It is again mentioned in Season 4 when it is revealed that Alison spent some time here with a much older boy, known as the Beach Hottie.

“You’re taking me away for my birthday. And all I can do is say, yay. But you’re better with words than me. Seriously can’t believe I met you in Rosewood. I thought I knew that town. Nothing but and lies. Its best-kept secret was you. But you’re my secret now. My friends wouldn’t understand. They want this to be their weekend, but I want to be the person who shows you the Cape. You can hate the ocean but I promise you’ll like the view. That’s if you’re with me. Maybe we can take a few pictures, too. Ones worth like a hundred thousand words. Our imagination can take care of the rest…for now.
Your favorite, Alison”

notes between ali and cece about ali being pregnant

photos of ali in cape may

Photos board shorts took in cape may

Pictures board shorts took in cape may 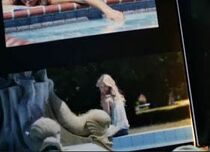 picture board shorts took in cape may

Ali's letter to board shorts

Alison's letter to Board Shorts 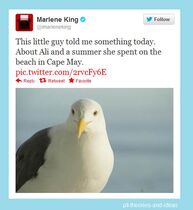 Tweet from Marlene King
Add a photo to this gallery

Retrieved from "https://prettylittleliars.fandom.com/wiki/Cape_May?oldid=1005221"
Community content is available under CC-BY-SA unless otherwise noted.