Crushed is 13th book in the Pretty Little Liars series. The book was released on June 4, 2013

Spencer is featured on the book cover. Under the dust jacket, the front of the hardback book reads "Catch me if you can. -A."

It's springtime in suburban Rosewood, which means iced soy lattes, fresh manicures in shimmering pastels and prom. But while everyone else is flipping through the racks at Saks in search of the perfect dress, Hanna, Spencer, Emily, and Aria are on a different kind of hunt: They're looking for A....

Hanna puts her campaign for prom queen on the back burner to volunteer at a burn clinic, where one of A's victims is recovering. Emily digs into Ali's past at the mental hospital with some very crazy consequences. Spencer contacts an amateur private eye to help her stalk her stalker. But when their sessions get a little too private, they may forget to keep their eyes on A. . . . And Aria's worried that A is even closer than she thought. When her dark secret from Iceland comes to light, she discovers that maybe, just maybe, the one person she's been trying to hide the truth from has known all along.

The liars are finally taking the fight to A. But no matter what they do, A's always one step ahead, ready to crush the girls completely.

The prologue explains how while in Iceland during summer vacation with Hanna, Mike, and Noel, Aria met a boy named Olaf. Aria kissed Olaf and then helped him steal "The Starry Night," a famous Van Gogh painting, from a nearby house, abandoning Olaf when the police arrive. Hanna helps Aria escape, and Olaf mysteriously evades the police with the painting.

At the beginning of the book, Reefer dumps Spencer to go to Colombia for a botany internship with Dr. Diaz. Spencer is devastated, left without a boyfriend or a prom date, only exacerbated by a snarky note from A teasing her about her loss and threatening her. Meanwhile, Hanna is at Rive Gauche, where Mike surprises her with the lacrosse team, convincing her to run for prom queen. Hanna agrees after much coaxing, but is less pleased to see that Chassey Bledsoe, a former dorky classmate of Hanna's, has transformed into a beautiful rival for the crown. Hanna receives a note from "A" telling her to not run for prom queen, or else. Emily reflects on the past events, particularly upset about her love interest, Jordan, while shopping with her mother. Yet another note from "A" arrives for Emily, threatening to spill the girls' secret. All four girls receive messages from Agent Fuji, a women in charge of the Tabitha Clark case. Agent Fuji requests to meet with all four girls.

Aria and Hanna, while watching a lunchtime lacrosse event, discuss Agent Fuji's request. A school announcement reveals that Noel is nominated for Prom King. Hanna and Chassey are nominated for Queen. The theme of the prom is based on "The Starry Night," coincidentally the same Van Gogh painting Aria helped steal in Iceland. Aria receives a note from "A," reminding her of Graham Pratt, her friend from the Eco Cruise who is now in the William Atlantic Burn Clinic in Rosewood as a result of explosion.

The girls convene at Spencer's house before their meeting with Agent Fuji. They resolve to make a plan to stop "A" with a leaf blower blowing, so no one- Even "A"- can hear them. They decide to get rid of their cellphones and use burner phones so "A" can't send them texts. Also, they decide to meet in one of her mom's boyfriends estates for sale because it has a panic room. When Agent Fuji arrives, the girls said they ran into Tabitha a few times and she acted strange. Later on they meet at the Estate. They all believe Ali is still alive and still A then they realize Ali has had an accomplice all along. No way could Ali do all those things alone without a helper. Spencer explains the Dilaurentises' were basically broke from the expensive mental hospital bills. They make a list of possible suspects of her accomplice. They come up with Darren, Jason, Graham and Aria's boyfriend Noel Kahn. They each do something to try to discover who "A" is. Hanna has to volunteer at the burn clinic because Graham is a patient there. Spencer tries to find Alison. Emily goes to The Preserve to talk to Ali's friend Iris. Aria must question Noel her boyfriend.

Spencer ends up finding a website with a theory that Ali is still alive and some evidence. She emails the person who made the website. He gives her more details on Alison. They decide to meet and she falls for him immediately. She asks him to prom and said he would love to go with her. His name is Chase and he seems to have gone through the same thing the girls did, being stalked by his roommate and almost killed.

At the burn clinic Hanna runs into Sean her ex who is shockingly kind to her. She befriends a burn victim named Kyla Kennedy. They form a close bond and talk about the hot male nurse who works at the clinic. They become somewhat closer and can relate to each other because they both used to be popular.

Emily continues to question Iris about Ali  but she evades her questions and gives little information until finally she reveals she doesn't know as much as she led on. Ali was quite secretive around Iris but Iris did reveal Ali had a mysterious guy who used to frequently visit her. Emily asks who but Iris doesn't know. Iris also explains Ali was excited to go to a place with her mystery BFF as soon as she was admitted from the Preserve.

Aria is still in denial over Noel even being involved at all. Her Iceland secret is eating her alive so eventually she reveals to Noel how she made out with Olaf and aided him in stealing the painting. Noel is furious and leaves her house in a hurry.

Mike is angry at Hanna over a fight and refuses to escort her to prom. She tries her best to get back on his good side. Meanwhile A makes it clear that Hanna shouldn't run against Chassey or else.

Spencer and Chase continue their investigation and find old pictures of Alison and Courtney. They learn that the twins didn't always hate each other. Chase helps her dig deeper into Alison's whereabouts.

Iris insists Emily take her to Tripp's house. He was Iris's old crush from the Preserve and she wanted to visit him. Although when they get to his house his mom says Tripp no longer lives there. Frustrated Iris sneaks into the house with Emily and they go to Tripp's old room. Finding no evidence that Tripp ever cared about her Iris sadly leaves with Emily. To cheer her up Emily suggests they attend prom together. Iris excitedly agrees.

Hanna and Spencer get ready for prom together. Then Chase picks Spencer up. Everything goes smoothly until he brings up her vacation to Jamaica something she's clearly never told him. This freaks her out and she now thinks he's working with Ali.

Mike takes Hanna to prom where she's elected prom queen. Then she gets an urgent call letting her know Graham woke up and she rushes to the burn clinic. While there she tries persuading Graham to tell her who was after Aria on the ship. He tries to say N... but something happens and Kyla directs Hanna in the wrong way and by the time she gets to him Graham is dead. Hanna now thinks Graham was trying to say Noel so her and the other liars try to find Aria.

Aria now is weary around Noel. She wants to believe he loves her. They go to a cemetery where Aria confronts Noel about his feelings for Alison. He claims he was in love with her and didn't believe she was crazy. This enrages Aria who reminds Noel that Ali killed Courtney. She then gets texts from her friends claiming Noel was Ali's secret boyfriend and was spying on Aria on the ship. This frightens Aria as she just wants to get away from Noel now but he pins her down trying to explain. The girls finally arrive with Spencer hitting Noel with a tool. Noel quickly flees.

The next day Hanna goes back to the burn clinic where it's revealed Kyla Kennedy has been dead for days. This confuses Hanna as she was just talking to Kyla leading her to believe that wasn't really Kyla and probably was Ali in disguise as she had many bandages on her face. She's given a note supposedly from Kyla. It's eerily written in Ali's handwriting. It says to go to the shed before it's too late.

All the girls head to the shed along with the police. They feel it's a trap but the police open the shed anyway. Inside is Noel Kahn's body heavily beaten and bruised up. It's unknown if he's dead or not. Then the girls get a text message from A of course telling them that A was always one step ahead. Noel isn't the accomplice and A knew about the suspect list all along. They haven't discovered anything and they're back at square one.

Why Noel may be dead:

Noel might be dead because the evidence the girls collected made it seem like Noel was A. Noel visited Ali in The Preserve and was also in love with her. Aria finding out this is true, she freaks out and tries to leave. (They were in a graveyard) Noel jumps onto her bring her to the ground trying to get her to listen to what he has to say. He is hit over the head by Spencer, he runs off saying the girls are insane. The next morning Aria is moping around and asking the girls not to tell the police about Noel being A until she talks to him. Hanna learns the next morning the patient at the Burn Clinic, Kyla that she became friends with was dead. The most horrifying thing was she had died 2 days ago and someone was in the Clinic impersonating her. Hanna had a note left inside of her Burn Clinic uniform from Kyla telling her to check the Rosewood shed before it was too late. The four girls go with police to check the shed in the shed they find Noel's body. Aria immediately breaks down and no one checks if Noel is dead or alive, but they call the ambulence. They receive a text from A saying that she's always one step ahead of them and Noel isn't her companion. So is Noel Dead or Alive? We'll find out in Deadly.

Prologue: Bad Mojo (All the girls)

Better find another before it's too late

Unless, of course, I happen to spill

My tale of all the folks you've killed.

Your situation has become quite dire.

Sleuths you're not; you haven't solved shit. 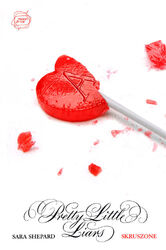 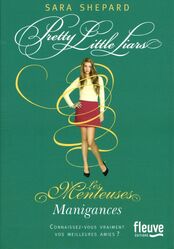 French Cover
Add a photo to this gallery

Retrieved from "https://prettylittleliars.fandom.com/wiki/Crushed?oldid=1007944"
Community content is available under CC-BY-SA unless otherwise noted.