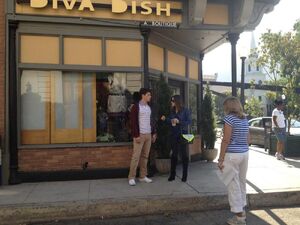 Diva Dish is a local boutique located beside Rosewood Town Center. It is shown that CeCe Drake worked here until she fled town in "Hot Water".

What Becomes of the Broken-Hearted CeCe asks Aria to fill in for a no-show photographer and Aria agrees to help her out and take photos of clothing items for the Diva Dish website. Later on, Aria takes Wesley to help her take the photos. While he is in the basement looking for props, CeCe suggests that Aria should hook up with Wesley and also asks if he has an older brother. Aria doesn't respond, implying that she is dating his older brother. CeCe then leaves to get a take away dinner. Wesley accidentally spills red wine on a white rug and Aria rushes to help him clean it up. As they chat, Wesley reveals that he actually has no one to stay with, so Aria says that he can sleep on the couch at her house. CeCe then calls Aria and claims that her car was towed when the camera shows her sitting in it. Dead to Me Wesley and Aria talk here. I'm Your Puppet Caleb and Hanna talk beside here after "A" framed Caleb's dad for stealing the church bell.

The Mirror Has Three Faces Spencer remarks to Hanna that it won't be easy to find CeCe - she isn't folding skirts at Diva Dish anymore, she skipped town. Bring Down the Hoe Hanna gets an envelope full of money with the logo DIVA DISH. She assumes its from "A" but it is revealed later on in the episode that it came from Travis, who was there the night Darren Wilden was shot and murdered. The money was actually given to him to shut him up since he saw that Ashley Marin drove off and did not in fact kill Darren Wilden.

Retrieved from "https://prettylittleliars.fandom.com/wiki/Diva_Dish?oldid=1020656"
Community content is available under CC-BY-SA unless otherwise noted.