The Drake Family is a prominent family line throughout the Freeform series, Pretty Little Liars. The Drake family is heavily connected to both the DiLaurentis and Hastings families.

The beginnings of the Drake family remain unknown, as the earliest dated members are Carol Ward, and the identical sisters, Mary and Jessica Drake. Mary and Jessica were born on December 18, 1965, just mere minutes apart, with Mary being born first. They grew up distant from one another, without much in common, and it became clear earlier on to Mary that Jessica was deeply troubled. One day, Mary asked Jessica to cover for her at a babysitting job, and when Mary returned, she discovered that the child had died while under Jessica's care. Jessica than encouraged their parents to have Mary institutionalized for psychopathy and treatment, and their parents soon admitted her to Radley Sanitarium.

While Mary was in and out of the Sanitarium throughout her life, Jessica began building her life and entered the real estate business. Mary enrolled in college and had a sexual relationship with Ted Wilson, shortly before she was readmitted to Radley for more "behavioral issues". Jessica took over the care of Mary, and it was then that Jessica and her husband Kenneth DiLaurentis decided to adopt Mary's child as their own. On May 21, 1988, Mary gave birth to her son, whom Jessica and Kenneth immediately adopted and named Charles DiLaurentis. They claimed Charles as their own and raised him under the pretenses of him being their biological child.

During this time, Jessica and Kenneth had moved to Rosewood and into the house next door to the Hastings'. In 1998, Jessica had a sexual affair wtih Peter Hastings, which resulted in her unexpected and unplanned pregnancy. She lied to Kenneth and told him that the child was his, and a few months later she gave birth to her and Peter's son, Jason DiLaurentis. Jason grew up with Charles but was never fully aware of who his brother was, remembering him later in life as an imaginary friend. In June or 1994, Jessica and Kenneth had their first child together, Alison DiLaurentis.

While Alison, Jason, and Charles were growing up, Mary was vengeful toward her sister for taking her son from her. On one of her nights out, Mary arrived in Rosewood, having tracked down her sister and her family. In an attempt to ruin and get back at her sister for years of involuntary commitment and the adoption of her son, Mary pretended to be Jessica and had sex with Peter Hastings. This time, Mary became pregnant and was placed back into Radley soon after the affair. Jessica approached the Hastings' and explained to them what had happened with Mary and Peter and that Mary was now pregnant with his child, and planned to deliver the child in Radley Sanitarium where she was currently contained.

Veronica and Peter Hastings agreed to adopt the child as Veronica didn't want him or her to be lost in the foster care system. On April 11, 1994, Spencer Drake was born to Mary Drake in Radley Sanitarium. The nurse immediately took Spencer to her adoptive mother, Veronica. Unbeknownst to anyone else at the time, Mary was pregnant with twins and had cut a deal to get out of Radley by giving up one of the twins. Minutes later, Mary's second-born daughter and Spencer's identical twin sister, Alex, was born. To buy her way out of Radley, Mary decided to sell the second baby, Alex. Dr. Cochran, who delivered the twins, arranged the adoption in exchange for half the money. Alex went to live with a wealthy couple in England. After the birth and Mary's discharge, Mary attempted to track down her daughter but was always one step behind her.

When Jason was in his early twenties and Alison a late teenager, Mary was released from Radley and made her way to Rosewood and to her Aunt Carol Ward's house. When Mary arrived and asked to see Charles, Jessica coldly informed her that he had died. Jessica cruelly told Mary to pull herself together while Mary begged her sister to tell her how Charles died and to give her answers. However, Jessica only told her she wasn't supposed to be in Rosewood, that Charles was dead and that even though Mary birthed him, he had been Jessica's son - not Mary's. Mary was left unaware of her sons transition into a woman named Charlotte.

Around 2011, after Alison's return to Rosewood, Jessica's body was found in the Hastings' backyard by Pepe. It was later revealed that "A" had buried Jessica but didn't kill her. Instead, it was Mary, who had killed Jessica after having learned that Charles was Charlotte and wanted revenge on her sister for lying to her. Mary unearthed a plot that Jessica and Peter had made to kill Mary first. Peter and Jessica didn't want Mary to get close to Spencer, as they were afraid that Mary would destroy both of their families. Mary discovered the plot and flipped it, using Peter's medication to murder Jessica and did everything she could to frame him for the murder.

Mary then spent many years trying to locate her second-born daughter, Alex, with no prevail. When Mary found out about a DiLaurentis' death, she returned to Rosewood and discovered that it was Charlotte that had died. Heartbroken over the loss of her daughter, she teamed up with "A.D.", who she later learned was her daughter, to secure the rest of Charlotte's money. When her niece was being tortured by Archer Dunhill, she switched sides and began helping both Alison and The Liars. 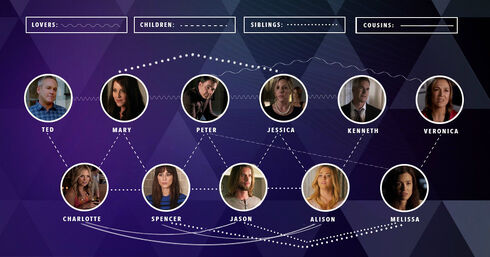 Retrieved from "https://prettylittleliars.fandom.com/wiki/Drake_Family?oldid=1021102"
Community content is available under CC-BY-SA unless otherwise noted.