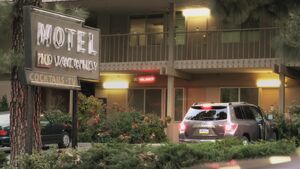 The Rosewood Motel, also known as the Edgewood Motor Court, is first seen in Can You Hear Me Now? when Spencer drops Wren off there and Hanna picks her up. Later in the season, Spencer and Toby spend the night there, trying to figure out who may be setting them up.

In "Can You Hear Me Now?" Wren spends the night here after drunkenly breaking in to Spencer's house. Spencer drives and walks him to his door, and kisses him, but declines his offer to come inside. Hanna pulls up and sees the whole thing.

In "The New Normal," Spencer and Toby drive past this motel and the camera focuses on door 214, foreshadowing for a future episode, "A Person of Interest," when Toby spends the weekend here to avoid Jenna's wrath at home in his parents' absence. Spencer drops him off, then hears flute music and follows it to room 214, inside which she spots the Neufeld's bag she saw Ian hand Jenna in the previous episode.

Broken door - a plus.

Wren in the motel
Add a photo to this gallery

Retrieved from "https://prettylittleliars.fandom.com/wiki/Edgewood_Motor_Court?oldid=895611"
Community content is available under CC-BY-SA unless otherwise noted.