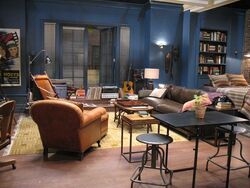 Ezra's apartment was the only place where Ezra and Aria could openly exist while their relationship was a secret. Ezra has decorated his apartment with vintage posters and numerous books. He's made room in his studio apartment for a typewriter, record player, and a telescope.

Byron mentions in "A Hot Piece of A" that he and Ella once attended a party in that building during grad school.

Retrieved from "https://prettylittleliars.fandom.com/wiki/Ezra%27s_Apartment?oldid=913721"
Community content is available under CC-BY-SA unless otherwise noted.