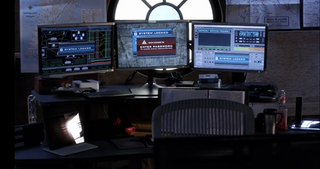 Ezra's Lair is where Ezra Fitz keeps all items and information pertaining to research and surveillance for the book he is writing about Alison DiLaurentis. It was first seen (in its entirety) in Ravenswood, by the Liars, in "Now You See Me, Now You Don't".

Bring Down the Hoe Ezra's Lair is first seen as CeCe Drake leaves an angry voicemail at someone who has been making her wait. She yells, "I sure as hell am not going back to Rosewood," implying that this lair is located somewhere else. Only one view of the room is seen, which contains stacks of photos of Ali and the Liars. The camera pans past a red trench coat draped over a chair. Now You See Me, Now You Don't Red Coat (Alison) leads Spencer to an apartment in Ravenswood. Inside the lair, there are large posters of Alison on the walls and timelines of notes and photos mapping out the liars' whereabouts, secrets, and private moments, including Wren's. There are also three computers that track The Liars' every move and the Rosewood Police Department's. They find a letter from Alison to Board Shorts in a book full of pictures of Ali and bank records. The Liars also find a closet with black suit jackets hanging up. At the end of the episode, Ezra Fitz comes into the lair and angrily slams the closet door. At the time, it was believed to be A's lair. Hot for Teacher Ezra opens a trap door in his cabin and walks downstairs leading to a basement. The basement contains boxes of photographs and items moved from his lair in Ravenswood. The tri-monitor computer surveillance system is set up on one side. Ezra sits down and scans through pictures of the Liars taken of their activities over the course of the episode. Later Ezra is seen accessing his surveillance cameras on a netbook while in the car.

“You’re taking me away for my birthday. And all I can do is say, yay. But you’re better with words than me. Seriously can’t believe I met you in Rosewood. I thought I knew that town. Nothing but and lies. Its best-kept secret was you. But you’re my secret now. My friends wouldn’t understand. They want this to be their weekend, but I want to be the person who shows you the Cape. You can hate the ocean but I promise you’ll like the view. That’s if you’re with me. Maybe we can take a few pictures, too. Ones worth like a hundred thousand words. Our imagination can take care of the rest…for now. -Your favorite, Alison”

The surveillance system from Ezra's lair in Ravenswood is seen in the basement of his cabin. 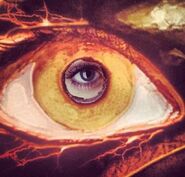 Retrieved from "https://prettylittleliars.fandom.com/wiki/Ezra%27s_Lair?oldid=1015604"
Community content is available under CC-BY-SA unless otherwise noted.