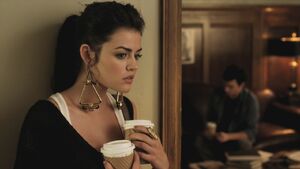 Ezra's Office was Aria and Ezra's hangout, where they were (mostly) not ashamed to show their affection for one another. Ezra's office is on Hollis College's campus.

Ezra no longer works at Hollis College, so his office is no longer seen on the show.

Aria first turns up in Ezra's office in "The Devil You Know," where Jackie spots them during an intimate moment. She visits him there again in "Surface Tension" to talk him out of coming to the dinner party her parents invited him to. Aria shows up to his office in "Picture This" with ideas as to how they can spend the time before his next class (in 15 minutes). Later, they share snacks from the vending machine. In "Over My Dead Body," Ezra is lying on the couch of his office reading. Aria shows up with coffee, only to discover Jackie has beaten her to it. She overhears Ezra turn down Jackie's advances, citing he is seeing someone. Byron and Ezra discuss their classes and Aria's recent trouble with the cops in "Through Many Dangers, Toils, and Snares." The next day, Aria goes to Ezra's empty office to return a book. Jackie shows up and Ezra walks in on them arguing. After she leaves, they have a chance to talk and decide to tell her parents about their relationship once and for all. The conversation doesn't go well, and we later see Ezra recovering from a punch from Mike here. Jackie enters without permission again and he kicks her out. Hanna pops in on Ezra in "Hot Piece of A" to let him know she and Aria's other friends approve of their relationship.

Retrieved from "https://prettylittleliars.fandom.com/wiki/Ezra%27s_Office?oldid=864844"
Community content is available under CC-BY-SA unless otherwise noted.