Before The First Secret

Hanison is the friendship pairing between Alison DiLaurentis and Hanna Marin.

Alison gave Hanna the name "Hefty Hanna" mocking her weight, Despite being the sweetest of the bunch, Hanna was often cruelly mocked and teased by Alison. This is seen in "Know Your Frenemies" as well as in "Never Letting Go" and other episodes. In "Know Your Frenemies" we also find that Alison even convinces Hanna to throw up to lose weight.

She also convinces Hanna not to eat in "Pilot" saying she is being a friend. She often left Hanna feeling bad about herself. Hanna also has the most hallucinations about Alison such as in the hospital and with her therapist. This could be because she never had the guts to stand up to Alison and has bad feelings about this or it is possible that Hanna had these hallucinations because she is missing Alison a lot and she actually cared a lot for Alison.

After Alison's disappearance, Hanna (with the help of Mona Vanderwaal) loses weight, changes her hair and clothes and takes Alison's place as "Queen Bee" at Rosewood High for a while. In Season 5, Hanna realizes that Alison has had such an effect on her life, that she's never had her own identity because she modeled herself after Alison. Hanna becomes embittered and untrusting of Alison as a result.

However, Hanna quickly started to regret her decision and still cares for Alison deeply and Alison has been shown to start treating Hanna like a real friend.

Pilot Alison convinces Hanna to not eat a cookie while they're at Spencer's house, stating that she's being a friend. Hanna disregarded Alison's "help", because she is later seen eating the cookie while Alison and Spencer are talking. 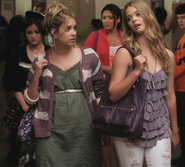 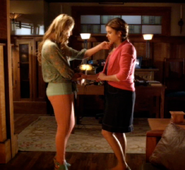 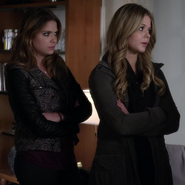 Retrieved from "https://prettylittleliars.fandom.com/wiki/Hanison?oldid=1021516"
Community content is available under CC-BY-SA unless otherwise noted.