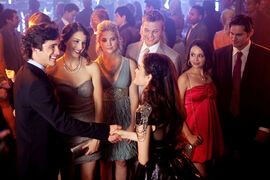 While discussing their plans for the homecoming dance, The Liars open their fortune cookies to find another message from "A", cluing them into the fact that she will be attending Homecoming as well.

At the dance, Hanna and Spencer joke with Aria that they will share their dates with her. Spencer then catches sight of her sister, who is attending to present the crown to the next homecoming queen, as she is a former homecoming queen herself. She tells Spencer that she knows that she stole her essay and seems intent on ruining the night for her sister.

Then, Mona and Hanna get into a heated argument when Mona makes nasty comments to Lucas, who has come to photograph the dance for the yearbook. Hanna greets him warmly, but Mona shoos him away. After he leaves, the two argue over whether popularity is more important than being nice.

Meanwhile, Melissa takes the opportunity to drive a wedge between her sister and Alex. She mocks Alex for being a lowly laborer at the Rosewood Country Club and then goes behind Spencer's back to make Alex believe that Spencer only invited him to anger their father. Aria and Ezra’s efforts to keep things platonic are thrown a curveball when Aria discovers that they’re both assigned to administer the same booth. There, Aria reaffirms that "A" is not a friend, only someone messing with her. Before Ezra responds, Mrs. Welch comes to relieve Aria.

After that, Toby and Emily arrive at the dance, making The Liars and Maya nervous. Emily is particularly surprised by Hanna's reaction, as she had seemed so supportive of Emily following her heart. Hanna then confesses that she had thought Emily was referring to Maya, but before they can continue their conversation, Toby appears.

The girls try to enjoy by dancing with their dates, but then Spencer calls them to gather, convincing Hanna to go steal Jenna's file. She commissions Aria to keep Sean occupied on the dance floor while Hanna slips out to his mother's office building.

Meanwhile, Spencer ignores Alex, because she worriedly was keeping an eye on Toby and Emily. "A" tampers with a Tarot card at the fortune teller's booth to let Spencer know that she is also watching the pair and that her friend is in danger. Vexed by the Hastings sisters' treatment of him, Alex eventually leaves.

Then, Emily approaches Maya and accuses her of saying something to Hanna, who gets offended by Emily's attitude and defensively insists that Hanna had said something to her. She accuses Emily of not being okay with who she is. Toby sees Emily is sad and realizes that he isn't Emily's first choice of a homecoming date.

On the dance floor, Aria and Sean appear to finally be having a good time. Ezra spots them, then walks away, and Aria runs after him. He tells Aria that seeing her dancing with guys at her own age makes him realize that breaking up with her was the right thing to do. At the same time, Aria's attention to Sean sends the newly-crowned Homecoming King mixed signals. Hanna misses being crowned, and Sean is photographed standing alone.

Later, Toby whisks Emily away to the Chemistry Lab to speak to her privately about his big secret, which the girls have just uncovered in what turns out to be Toby's file that Hanna retrieved from the psychiatrist. The girls realize what Alison had blackmailed Toby with in order to force him to take the blame for "The Jenna Thing". Jenna is seen standing close by to the girls, eavesdropping on their conversation, unbeknownst to the Liars. Assuming this was Toby's motive for murder, they send Emily a text message claiming that Toby killed Alison, making her more and more unsettled. As Toby tries to explain, she pushes him into the cabinet of beakers, injuring him badly before hurting herself as she runs away and trips on the train of her dress, hitting the hard floor and falling unconscious.