Can You Hear Me Now?

Isabel Marin (née Randall) is the mother of Kate Randall, the wife of Tom Marin, and the stepmother of Hanna Marin. Isabel hails from a proper background that is financially stable.

When she first meets Hanna, she is polite towards her, but it seems obvious that she wants Tom to show more affection for Kate than for his daughter. She also looks down on Ashley and Hanna. Isabel went after Tom while he was still married to Ashley, and in Save the Date Ashley commented having reversed roles with Isabel as the other woman. Tom and Isabel are now married. She often antagonizes both Hanna and Ashley and her mother-in-law, Regina does not like her.

Can You Hear Me Now?

She was briefly introduced at the Apple Rose Grille, where Hanna expects an intimate dinner with her father, she meets Isabel and first learns that she is her father's projected fiancée. The two kiss before finding a table. Throughout dinner, everyone is polite, and the conversation mainly revolves around Kate, Isabel's daughter.

After Kate tells a story about her sailing, highlighting how expert she is, Isabel asks Hanna if she sails, plainly contrasting the two girls. She suggests that Kate could teach Hanna how to sail, and Hanna makes a joke that nobody gets. The evening is awkward for Hanna, who feels completely unappreciated, while Kate and Isabel are the centers of attention. After her father insensitively brings up her totaling Sean's car, Isabel and Kate smirk at each other.

As of late, Tom's and Isabel's relationship has been estranged, and their engagement status, fragile. Hanna goes as far as to delete a text from Isabel attempting to reconcile with Tom, a small attempt to make way for her parents' reconciliation. It seems that everything is back to normal except when the eponymous invite shows up in Hanna's mailbox.

Tom tries to arrange for Hanna to meet Isabel for bridesmaid gown shopping.

Hanna throws up on Isabel's untraditional wedding dress, due to accidentally consuming a huge amount of alcohol, the night before the big event. But luckily by the next day, Isabel has found a similar replacement dress.

Over My Dead Body

Their wedding day is set to take place; however, by "A" command Hanna tells Isabel how her mother and father hooked up when he came back to Rosewood, causing the wedding to be indefinitely put on hold as she's upset with Tom. Hanna waits until the middle of the ceremony to take the bride aside and spill the news, though Isabel complies, as she doesn't know what else to do.

Through Many Dangers, Toils, and Snares

We come to know that Tom and Isabel got married eventually in Baltimore in some court justice's office.

She returns to see to it that Hanna is forced to attend truth up day for sending a picture of Kate naked in the girls' locker room to everybody in her contact list. She wants to see Hanna punished but Hanna proves that Kate was one who sent that picture. She looks at her daughter in shock that she would do such a thing. </tabber> 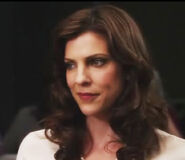 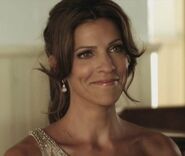 Retrieved from "https://prettylittleliars.fandom.com/wiki/Isabel_Marin?oldid=1024945"
Community content is available under CC-BY-SA unless otherwise noted.