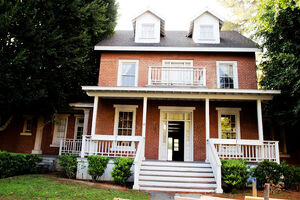 Jenna's House, also known as The Cavanaugh House is located at 47 Serenity Lane in Rosewood.

Jenna lives here with her mother and stepfather, Toby's father, although they are yet to be seen on screen and not much is known about them. Toby also lived at this address during Season 1 and Season 2, although it was clear that he was in a hurry to move out. He subsequently moved out of the house and into the loft above The Brew in Season 3. Jenna's room is adorned with neat rows of snow globes and other trinkets on her shelves, some of which the young artist probably created. Toby's room was shown in a flashback in 'A' is for A-l-i-v-e.