Ezra's child (exposed; false)
Not aborted (exposed)
Unknowingly knew a member of the A-Team (exposed; revealed to be Spencer Hastings)

Malcolm Cutler is Maggie Cutler's son and was

believed to be Ezra Fitz's seven year old son. He was portrayed originally by Flynn Morrison, and then portrayed by Teo Briones. His father is revealed not to be Ezra, but some "mistake" made by Maggie with another man.

Malcom was first mentioned in when Wesley Fitzgerald said that his mom "made sure she took care of it", which seemed to mean that she got an abortion, but Aria later finds out that isn't the case.

We learn that Maggie kept the baby, when Aria takes a train into Wilmington to meet Maggie. He asks Maggie if he can have a play date with Brian, then she explains that he is her son. Also, when Ezra called Maggie to see how she was doing, Maggie didn't mention Malcolm. Wesley and Aria think Ezra's mother convinced Maggie to keep quiet about it.

Out of the Frying Pan, Into the Inferno

Ezra learned of Malcolm's existence, and sets off to meet him at the end of the episode.

Out of Sight, Out of Mind

Malcolm and Maggie are forced to move into Ezra's Apartment, after Dianne sells their condo in Delaware. Malcolm seems to be bonding well with Ezra and plays with a train set with his father and Aria. Later on in the episode Aria babysits Malcolm and he falls while jumping on the bed, getting a cut on his chin.

Aria was supposed to pick up Malcolm from his karate class, but his instructor tells her that someone already did, using Aria's name. In his cubby, there is a flyer for the carnival with the letter "A" circled. At the carnival, Malcolm is seen watching a puppet show and a black glove covered hand is taking popcorn. Malcolm is found by Aria and he tells her that her friend Alison brought him.

Hanna goes to babysit Malcolm, telling him that watching TV will turn his brain to mush. He turns off the TV and begins to play "guess who" with Hanna on her phone. He recognizes Aria but doesn't recognize Mona, CeCe or Melissa. Later on, while Malcolm is playing games on Hanna's phone, pops up a photo of Ali and Spencer sent by blocked ID (possibly A) and he tells Hanna that Alison is in the picture. Hanna is clearly confused as she knows (well, thinks) that Ali is dead. Malcolm then points out that the one in the blue shirt, Spencer, was the one who took him to carnival. Hanna realizes that Spencer is part of the The A-Team.

Malcolm sees Aria and Jake and asks her why she does not come over anymore. This marks Malcolm's last appearance on the show.

The Mirror Has Three Faces

Ezra finds out through a result of an DNA test he's not Malcolm father, which he takes very hard and confronts Maggie about it. 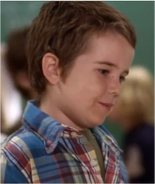 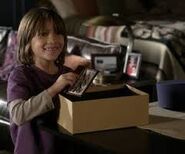 Retrieved from "https://prettylittleliars.fandom.com/wiki/Malcolm_Cutler?oldid=1020696"
Community content is available under CC-BY-SA unless otherwise noted.