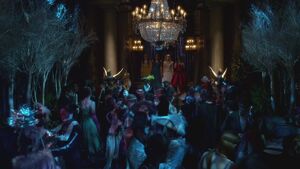 The Masquerade Ball is a dance organized by the Rosewood Junior League, to which The Liars were invited by "A" in "UnmAsked". Everyone wore masks, making it hard to tell who was who. Many things happened at the ball such as surprising returns, revelations, and romances.

The Liars receive a text from "A", instructing them to return the cellphone as a messenger delivers invitations to a masquerade ball along with a message from "A" that demands their attendance. Spencer is sure they can discover who "A" is before the midnight.

Later, the girls arrive at the masquerade together. They have three hours to figure out who "A" is and agree to split up for the next hour to investigate separately. A masked individual sneaks up behind Hanna and whispers in her ear. He corrects Hanna that his name is Romeo, not Caleb. Mona walks up and reveals she helped Caleb pick out his costume.

Caleb and Hanna go off to dance and Spencer witnessed the whole thing. She tells Mona what a great friend she's been to Hanna. Mona seems truly touched by the compliment. Mona brings up the last time Mona saw Ali - at a vintage shop in Brookhaven.

Jenna, while texting someone, watches Aria from across the room. Aria receives a text and excuses herself to go look around. She enters a maze and Jenna follows, taking off her mask, revealing her eyes to viewers once again. Waiting at the end of the maze is a masked Ezra and Aria is very happy to see him. While Caleb and Hanna dance, Spencer calls Emily, telling her she and Mona drive back to the Lost Woods Resort to look for clues.

Aria and Ezra have their first official dance. They remove their masks and even kiss in public, not caring who might see. Elsewhere, a masked Paige dressed in a suit approaches Emily.

Paige and Emily sit down and have a conversation about their relationship. Paige wishes she hadn't let Emily go the first time around. In the end, they decide to be friends. Back at the party, Hanna happens to notice the Black Swan make an entrance.

The other girls reunite with Hanna and all three are curious about the identity of the Black Swan. They see her talking to Jenna and Lucas. When they try to get a closer look, the mystery woman runs away, escaping out the back door which locks behind her. All she leaves behind is a feather from her dress.

Hanna tries to call Spencer, but her phone isn't working. Aria makes the call instead as they realize Hanna's phone has been set to record every time it is turned on. Spencer covertly answers Aria's video call so that her friends can see and hear her conversation with Mona. The girls come to the realization that Mona is in fact "A", leaving Hanna in a state of disbelief that her so-called friend is the tormentor. A quick-thinking Spencer drops the hint that they are headed to Lookout Point. Aria knows a shortcut and they race to get there first.

Hanna wanted to go as Juliet, so Mona helped Caleb to dress like Romeo and surprise Hanna.

It isn't known what Spencer's and Emily's dresses represent, but fans speculated Spencer is a bumblebee, and Emily is a peacock.
Melissa went as The Black Swan, unknown at that moment.

Fans believed back then Melissa wasn't the only Black Swan, Aria's dress highly resembling another version of that costume. Mandi Line, the costume designer of Pretty Little Liars, confirmed her dress was, indeed, Black Swan inspired. ([1])

At the Masquerade Ball, there are two women that are predominantly seen in the background. Both have golden masks (though different). The straight-haired blonde is seen walking in as Hanna and Mona start talking at the ball and when Paige and Emily are sitting at a table. The curly-haired blonde is seen by Emily just before Paige begins to talk to her.

Both of them have some kind of importance, as Marlene King implied back in 2012. It is presumed one of them is Alison and the other was a "prototype" for CeCe, foreshadowing her first appearance next season.

Some fans believed it was a clue for Alison and Courtney (the twins from the book). However, it was disapproved.

Retrieved from "https://prettylittleliars.fandom.com/wiki/Masquerade_Ball?oldid=886666"
Community content is available under CC-BY-SA unless otherwise noted.