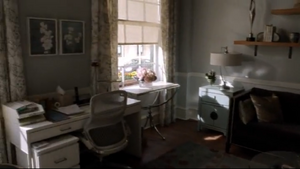 Melissa Apartment is the apartment where Melissa stays in after she moved out of her parents house offscreen.

Birds of a Feather Hanna interjects that they need to find out who the Black Swan is pronto. They also need to find out where Melissa lost her baby, but Spencer is still on the defense. They know why Mona hated the Liars, but why would Melissa have a vendetta against the Liars? Aria says that Melissa knows that the liars have the video of her in Ali's room the night she disappeared. Also, she fits the costume. Immediately, Spencer decides to go to Philly to talk to Melissa. Hanna, Aria, and Emily are near Melissa’s Philadelphia apartment. They watch Melissa go out and Hanna calls Spencer. The plan is for Spencer to keep Melissa busy, so that the others can search her place. Spencer tells girls not go inside the apartment until Melissa meets her. After awhile..... the girls have been waiting near the apartment for 20 minutes now. Spencer still hasn't texted them. The three liars decide to enter anyway. Inside, they search for medical records, or anything relating to the baby. Melissa texts Spencer that she’s got to run back to the apartment quickly for her wallet, so she'll be late. Spencer texts the girls, but they don’t see it in time. They notice Melissa through the window right as she’s about to enter the apartment. As the girls quickly try to put everything back together and hide, Melissa walks in. Melissa heads straight for the closet that the girls are hiding in to grab her wallet out of one of her coats, and it’s a close one for the girls. As they’re hanging everything back up they notice a hanging garment bag from a costume shop. It’s empty when they open it – except for 1 feather… that matches the Black Swan costume. They show the feather to Spencer. This proves Melissa's "A," but Spencer still does not believe it. They decide to go to Philly again and talk to Melissa together.

Melissa's Building
Add a photo to this gallery

Retrieved from "https://prettylittleliars.fandom.com/wiki/Melissa%27s_Apartment?oldid=503411"
Community content is available under CC-BY-SA unless otherwise noted.