- Was on the run (exposed to Caleb Rivers)

Miranda Collins is a Season 4 character on Pretty Little Liars, and one of the main protagonist of its spin-off series, Ravenswood. She is portrayed by Nicole Anderson.

A kindred soul, Miranda is a runaway teen living with foster parents. She runs away from her foster family to Ravenswood to meet her long lost uncle, and encounters Caleb Rivers on the bus ride there. Hanna Marin asks Caleb to stay with Miranda until she finds her uncle.

Miranda's only appearance on the show is in Grave New World, in which she becomes friends with Caleb on the bus ride to Ravenswood, where she hopes to finally meet her uncle. Throughout the episode, she and Caleb discuss her complicated history. She finally finds her uncle's house, but not before finding a mysterious headstone with her name and face on it.

Who's In The Box?

When Caleb has just returns from his stay in Ravenswood, walks into the Brew, surprising Hanna. The two embrace and discuss why he has returned. Caleb tells Hanna that things with Miranda and her family are more complicated than he had realized. Caleb tells her that he needs to go back there. Hanna protests and asks if it is because of Miranda. Caleb says that it isn’t like that, but Miranda needs him.

Hanna asks Caleb who has returned to Rosewood if Miranda found her family, and Caleb tells her he doesn’t know, saying the night Hanna left Ravenswood was the last time he saw Miranda.

No One Here Can Love or Understand Me

Hanna asks Caleb what he did, “you and the others”, and Caleb says that they took the jars down to the bridge where the car went in the water that first night and they opened them, all of them, and released whatever was inside. Hanna wonders what happened, and Caleb tells her nothing for a minute, then the woods were filled with fireflies. Millions of them. Caleb says that they drifted up into the trees and they were gone, “Mrs Grunwald called it ‘great ascendency’”. When Hanna asks what happened after that, Caleb says that there were no demons, no messages, no revenge. As Hanna mentions that there was also no Miranda, Caleb says that she was gone. Hanna tells Caleb that he kept his promise, he took care of Miranda, and Caleb tells Hanna that he has spent this whole time trying to talk himself into that. Hanna again reassures Caleb that he did help Miranda. 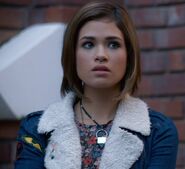