Before "Pilot" (Enemy)
"Taking This One to the Grave" (Friendly)

Monaria is the friendship pairing between Aria Montgomery and Mona Vanderwaal.

Aria was best-friends with Alison DiLaurentis, Mona's High School bully and border-line tormenter. During this time, Aria participated in treating Mona poorly under Ali's influence. After Ali disappeared, Aria was invited to Mona's birthday party, but only because their mutual friend, Hanna, was invited. Mona was later purposely mean to Aria, by asking her to pick up Ezra's goodbye gift. In "UnmAsked", Aria (along with the other Liars) find out that Mona is -A, which causes Aria to resent Mona. When Mona is released from Radley in Season 3, Aria decides to ignore her and wants nothing to do with her. In late Season 3, Mona started dating Aria's younger brother, Mike Montgomery, despite Aria's initial disapproval. The pair later bonded over their time in A's Dollhouse, and learned to tolerate one another for the sake of Mike. After five-years, the two are no longer friends but are still friendly in public. However, Aria doesn't trust Mona due to her affiliation with A and the A-team.

Aria has a flashback to October 2008 when she and Alison had cruelly ditched nerdy Mona only to find her father, Byron, kissing another woman inside his car.

Back in present day, Aria shows up to class after rekindling her friendship with Emily only to find out that Hanna and Mona are now the Queen Bees of Rosewood High. Hanna waves to Aria, as Mona glares at Aria. As if that wasn't shocking enough, she finds out her new teacher is none other than Ezra, the guy she hooked up with at the bar. Aria soon receives a text from someone called A saying that they know about her father's affair.

Mona delivers invitations for her camping birthday party to her friends during school and gives one to Hanna. Because The Liars are friends with her best friend, she invites them as well but they don't want to attend. They change their mind after receiving a text that A will be in attendance.

In the hallway, Mona catches up with Aria and asks her to pick out the farewell gift for Ezra. Aria initially tenses up when Mona asks her, afraid that Mona is onto their romance, but Mona merely points out that she was his stage manager and had worked closely with him, so she knows him best. Aria accepts, but when Mona asks her to step in with Hanna on her behalf, Aria flatly declines. With annoyance, Aria reminds Mona that she isn't hanging out with Hanna at this time. Mona asks why, seeming completely oblivious to the news about Ian and the bell tower, then suddenly remembers. Mona seems understanding of Aria's point of view as she leaves, and decides to come up with a way to win back Hanna's friendship on her own.

At the Rosewood Charity Fashion Show, Mona asks Aria if her legs were always that short despite the two of them being the same height. There is a tribute for Alison at the fashion show, but after the CD Mona gave Spencer is played, her image soon changes making it appear as the devil, with fire around and peeling black eyes. The screen flashes with the words "the bitch is dead," and the music changes from sentimental to hellish.

This episode takes place before the pilot in 2008. Alison and Aria went out for frozen yogurt and, as they are walking, Mona calls out for them. Aria looks inclined to stop, but Alison tells her that Mona should get a clue and the two run off giggling.

Aria, Mona, Spencer, and Emily all converse with Hanna, who informs them that her mom is "hot on the A trail." Ashley thinks the police report was sent to Hanna, not Mona, and gave it to Wilden because she thinks it will keep them safe. Aria is worried now that both of their moms are looking for "A" and is scared what "A" might do if they get too close. Hanna almost brings up Dr. Sullivan, but Spencer cuts her off, and says they need a creative solution to this problem. Mona has an idea. It requires a big lie and apparently she is terrible at that. She asks which one of them is the best liar and they all point to Aria. Slightly affronted, she asks Mona what lie she has to tell.

Mona suggests they all go shopping after school together to buy dresses for the Masquerade Ball. They all turn her down one by one, including Hanna, who lies about studying with Caleb. Aria decides to call Spencer, as Hanna's phone has been set to record every time it is turned on. Spencer covertly answers Aria's video call so that her friends can see and hear her conversation with Mona. The girls come to the realization that Mona is in fact "A".

Birds of a Feather

Aria and the Liars talk about the Black Swan and wonder if she is working with Mona.

Aria goes to see Mona at Radley Sanitarium in a supervised visit, and the latter asks if she wants to play a game while shuffling cards. When the nurse leaves to get medication, Aria demands that Mona tell her who is trying to hurt them. Mona only says "it isn't me" and "tell Hanna I'm sorry." Outside the hospital Aria meets up with Hanna. They decide to sneak back in to get more answers from Mona.

Later on, they look up and Mona is gone, along with the keys. Hanna and Aria find Mona in the Children's Ward. The girls find Mona combing a porcelain doll's hair. They beg her to tell them who is hurting them, but she repeats: "Miss Aria, you're a killer, not Ezra's wife," "Where were we? Maya's away sleeping sweet; until Garrett's all rosy, count on me," "No one to save Alison from evil."

The code that Mona used with Hanna translates to: "MAYA KNEW", "www.massugar.com", and "NOT SAFE". When the girls visit the website, a picture of Maya shows up on the screen. Underneath, it asks "What's the magic word?"

After the Liars find out that Mona got released from Radley, Aria suggests they ignore her but Spencer says she may know things that they want to know. The girls are talking about Mona at school, and Emily suggests that they all befriend Mona thinking that maybe she will tell them something about what happened the night of Halloween, specifically about Aria's dad. Aria leaves and is angry at the girls for thinking that he could be involved. Mona starts to climb the steps to go into the school while everyone says rude comments about her. She says, "Hi," to Aria as Aria passes her on the steps, but Aria just stares at her.

After the fire at Rosewood High School, Aria sees a note that proves A set them up. Aria thinks Mona is behind it.

While the girls are at The Brew discussing the latest events, Mona walks over and says she thinks Harold Crane is stalking her. She claimed that she met Harold while she was at the Lost Woods Resort, and they had a few conversations, but Harold wanted to have a relationship with her. Mona rejected him and he later followed her to the school where he bribed the regular janitor to take over his job. She thinks that Harold caused the fire at the marathon, but the Liars think there is more to the story.

Will The Circle Be Unbroken?

After Spencer is committed into Radley, the three other Liars talk about finding a way to visit Spencer while in the bathroom at Rosewood High School. Aria says that Emily was never the weakest link, Spencer was. Mona soon walks in and asks about Spencer. Aria tells her that Spencer is in Radley and that she's the reason for it. She also tells Mona, "If Spencer doesn't get better and she doesn't get out of Radley, you're gonna wish you broke your neck when you fell off that cliff." She is then immediately called to the Principal's office and Mona looks at her, smirking.

Maggie's son Malcolm Cutler is kidnapped and the Liars believe Mona is behind it. Spencer suggests that Mona wouldn't have taken Malcolm because it was too obvious; the A that took him seemingly wanted to be caught, but Aria says he is off-limits.

Later on at the lodge, Hanna, Aria, and Emily sneak up on Mona. Someone locks the building from the outside and sets the lodge on fire. In her panic, Mona reveals that she doesn't know who Red Coat is either.

After the Liars (and Mona) are pulled out of the lodge, the video recorder in Wilden's car is playing the incident where Ashley ran over Wilden, but discover that Jenna and Shana rushed over to his body and carried him away. They notice that something is strange with the trunk. Right then, the Liars and Mona all get a text from A: "You're mine now. Kisses —A." They open the trunk and gasp in shock at what is inside. 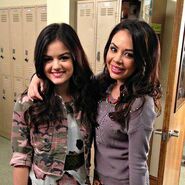