Pretty Little Liars: Original Sin is a spinoff of the Pretty Little Liars franchise. Loosely based on the parent series, which in turn are based off the popular series of novels written by Sara Shepard, this marks the third spinoff after Pretty Little Liars: The Perfectionists and Ravenswood. Production on the show began in August 2021 and ended in April 2022. It premiered with the first 3 episodes on HBO Max on July 28, 2022.[1]

Created by Riverdale showrunner Roberto Aguirre-Sacasa, a straight-to-series order was given on September 24th, 2020, at HBO Max.[2]

"Twenty years ago, a series of tragic events almost ripped the blue-collar town of Millwood apart. Now, in the present day, a group of disparate teen girls — a brand-new set of Little Liars — finds themselves tormented by an unknown Assailant and made to pay for the secret sin their parents committed two decades ago, as well as their own. In the dark, coming-of-rage, horror-tinged drama Pretty Little Liars: Original Sin, we find ourselves miles away from Rosewood, but within the existing Pretty Little Liars universe — in a brand-new town, with a new generation of Little Liars."

On July 2, 2021, it was announced that Chandler Kinney and Maia Reficco were set to lead the new Pretty Little Liars television reboot. Their character descriptions and names were also released.[3] Later, on July 27, Bailee Madison was cast in a leading role, opposite Kinney and Reficco.[4] On August 18, 2021, Zaria and Malia Pyles were announced to have joined the cast in starring roles.[5]

On August 31, 2021, it was announced that Alex Aiono, Mallory Bechtel and Eric Johnson were cast as series regulars.[6] The next day, Carson Rowland, Jordan Gonzalez, Ben Cook, Elias Kacavas and Benton Greene were set to be recurring characters in the series. On September 27, it was revealed that the mom's to the main characters had been found and cast. Among those were: Lea Salonga, Sharon Leal and Elena Goode as series regulars and Carly Pope and Zakiya Young as recurring. They will appear opposite stars Chandler Kinney, Maia Reficco, Bailee Madison, Zaria, Malia Pyles, Alex Aiono, Mallory Bechtel and Eric Johnson.

The theme song chosen for PLL: Original Sin is a remixed version of Secret by The Pierces. The soundtrack for the series is a blend of classic 90s, early 2000s, and newly released songs from varying artists.

Original Sin debuted with a 94% critic rating on Rotten Tomatoes, which an average tomatometer, and an 81% average audience score. While some critics called the series predictable, contrived, and slower to catch attention than its predecessor, others praised the series for a refreshing take on horror. Additionally, critics seemed to agree that the series was inhalable, scary, and violent.[7]

Metacritic described the series by saying, "In the grand television tapestry of manipulative teen girls, Pretty Little Liars: Original Sin isn’t revolutionary. But it is fun." The series had a score of 82 based on 5 critic reviews, though it received no user scores.[8]

The average IMDb rating for the series, after five episodes, was a 6.8/10 with over 1.7k ratings. It trended number 25 on the site. 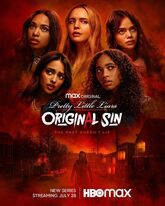