Pretty Little Liars is a series of young-adult novels by American author Sara Shepard, beginning with 2006's inaugural entry of the same name.

The series follows the lives of four girls – Spencer Hastings, Hanna Marin, Aria Montgomery, and Emily Fields – whose clique falls apart after the disappearance of their leader, Alison DiLaurentis. Three years later, when the girls are juniors in high school, Alison's body is found, and they begin receiving various messages from someone using the alias "A" who threatens to expose their secrets and get revenge.

The novels explore several serious issues such as bullying, murder, pregnancy, family issues, drug addiction, underage drinking, eating disorders, homosexuality, peer-pressure, infidelity, and mental illness. Moral ambiguity and the consequences of lying are featured prominently in the series; the girls constantly create their own problems through their unwillingness, to tell the truth about certain events and misdeeds they have done. The novels have frequently appeared on the The New York Times Best Seller list.

In 2010, a TV series loosely based on the novels began airing on ABC Family (now known as Freeform). The series aired for seven seasons until it ended in 2017.

The series is loosely divided into four arcs of four books each, chronicling the introduction and reveal of each "A". The series follows the lives of four teenage girls;— Aria Montgomery, Emily Fields, Hanna Marin, and Spencer Hastings— whose clique falls apart after the disappearance of their leader, Alison DiLaurentis. Three years later, they begin receiving text messages from an anonymous source, "A," who threatens to expose their secrets— including long-hidden ones they thought only their close friend Alison knew. But shortly after, Alison's body was discovered. The first arc covers Mona Vanderwaal's reign as "A" and the second arc focuses on solving the mystery of Alison DiLaurentis' murder, as well as Alison DiLaurentis' run as "A". The third and current arcs feature an "A" whose identity is currently Nick Maxwell who is helper A and all the girls knew him as someone else. There are two companion novels: the first, Pretty Little Secrets, is set between the first and second arcs. The second companion novel, Ali's Pretty Little Lies, is a prequel to the series. The four girls are nicknamed the Pretty Little Liars or simply the Liars.

Although the series features an extensive cast of characters of varying significance, the novels focus predominantly on six main characters:

An extremely competitive girl who strives for perfection in everything she does. A high-strung over-achiever, Spencer is willing to do whatever it takes to win, often to the detriment of herself and others. She is often quick to jump to conclusions and suffers from IED. Spencer was half-sister with Alison and Courtney DiLaurentis, her father had an affair around the time of Spencer's conception; her parents' divorce, when the affair comes to light. When she attends a summer program at Penn to improve her GPA, she becomes addicted to Easy A, leading her to frame a friend for possession in order to get admitted to Princeton. In Ruthless, she experiences hallucinations and paranoiac while suffering from withdrawal and guilt over her actions.

A pretty, popular girl who struggles with both bulimia and anorexia due to insecurities about her appearance. Flighty and occasionally air-headed, Hanna often acts purely on impulse. In Alison's absence, she became best friends with Mona, not knowing that Mona was "A". Hanna's parents divorced when she was younger after her father had an affair. Hanna dislikes her father's new wife, Isabel, and her daughter, Kate, with whom she forms a rivalry. For a short time, Hanna is sent to a mental institution, her father believing her eating disorders would resurface due to stress.

An artistic, independent girl whose family moved back to Rosewood after her father took a three-year sabbatical in Iceland. Prior to Alison's disappearance, Aria became aware that her father was having an affair with a student of his (Meredith); having promised to keep it a secret, she is kicked out of the house after the first "A" reveals the affair to her mother. Her parents' divorce and Aria's father marries Meredith, and she becomes pregnant. Aria often feels out of place in Rosewood and tends to be attracted to older, more worldly men, which frequently causes conflicts for her.

Emily is a dedicated swimmer and a shy girl with a sweet personality. She is bisexual, a fact which she takes great pains to hide until she is outed by the first "A". Although at first, her parents make attempts to "de-gay" her, they eventually come to accept her. Best friends with Alison, Emily was also in love with her, which caused her great anguish and continuously affects her judgment in the present. It was revealed in Twisted that she had hidden an accidental pregnancy from her family, later giving her child up for adoption. Despite this, she received a swimming scholarship to attend UNC.

Alison DiLaurentis was the most popular girl at Rosewood Day middle school. Unfortunately, she never got to have the full middle school experience as her twin sister Courtney fooled their parents into taking Ali to the mental institute instead of her. In revenge, she killed Courtney two years later and attempted to get revenge on her sister's friends as well. She was the second "A", and serves as the central antagonist of the series.

When she first arrives in Rosewood Day in third grade, Alison holds commanding reign over the school, with every girl wanting to be her and every guy wanting to date her. During a Thursday afternoon in sixth grade, Ali spots a flyer for the Time Capsule Tradition and boasts that she will have a piece flag given to her by her brother Jason. That weekend, Courtney was home from The Radley, her old mental institute that was being turned into a hotel, in order to switch to a new clinic, The Preserve at Addison-Stevens. Sometime that Friday, Ali's signature "A for Ali" ring was stolen by her twin. On Saturday morning - the day Courtney was to be taken to the Preserve, Hanna, Aria, Spencer, and Emily each arrive at the DiLaurentis home to steal Ali's flag piece. However, Courtney spots them shortly after arguing with Ali and immediately comes out and pretends to be her sister. 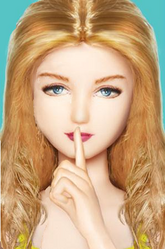 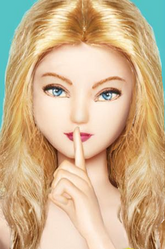 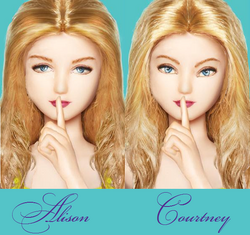 Courtney DiLaurentis was psychologically troubled and wanted to be Alison, but it is revealed in Ali's Pretty Little Lies that it was actually the other way around. Courtney was more popular than Ali, and Ali forced Courtney to be Ali. Fed up by this, Courtney attacked Alison because she was sick of her tormenting her. Their parents found Courtney's hands around Ali's neck, and tests were performed but nobody believed Courtney. The family moved to Rosewood and Courtney was placed at The Radley, a mental institute. She occasionally came home on the weekends, but she was forced to stay in the house, as the DiLaurentis family pretended they only had two children (Jason and Alison). She stayed there for about three years until the Radley was closed down. Her parents planned to send her to The Preserve at Addison-Stevens in Delaware, but Courtney was upset because she was expecting her parents to let her stay with them.

One weekend, when Courtney was switching from the Radley to the Preserve, she got into a fight with Ali and took her ring. Hanna, Aria, Emily, and Spencer wanted to steal the piece of the flag Ali bragged about for the Time Capsule competition. Courtney saw them sneaking around the yard and talked to them for a while. Their mom Jessica thought it was Ali because Courtney doesn't have a high school and doesn't have any high school friends to talk to. And her plan worked. Her mom, seeing that the real Ali didn't have her ring (therefore thinking Ali was Courtney) brought Ali to the institute. Courtney's reckless plan succeeded. She was now Alison DiLaurentis.

Now Courtney was best friends with Emily, Aria, Spencer, and Hanna, and in one way or another, she learned all of their deepest secrets. She often used the girls' secrets against them in order to keep them in line, along with "The Jenna Thing", making them promise to never tell anyone what really happened. Courtney mysteriously disappears one night at a sleepover, at the end of seventh grade. Three years later her body was finally discovered buried under the gazebo on her family's former property, launching a murder investigation. It is finally revealed in Wanted that the person the girls had all been friends with back in seventh grade was in actuality Ali's secret twin sister, Courtney, and that the real Alison had murdered Courtney for stealing her identity.

A is the main antagonist of the series. A is an anonymous extortionist who is privy to the Liars' deepest and darkest

secrets and uses these secrets to exact revenge on the Liars for (often) perceived wrongdoings. There are four different "A" characters throughout the series. The first "A", Mona Vanderwaal, was able to discover the Liars' secrets by reading Alison's old journal. During a physical confrontation with Spencer Hastings, Mona was pushed over the edge of a quarry and died. The second "A" is the true Alison DiLaurentis, who had her identity stolen by her twin sister Courtney who is also the one that really died. The third "A" is Nick Maxwell, Courtney's ex-boyfriend.