Pretty Little Secrets is the eleventh (based on order of publication), or more specifically fourth and a half, 4.5 (based on chronological plotline order) book in the Pretty Little Liars series by Sara Shepard, which was published on January 3, 2012 by HarperTeen.

The book is a side novel. Although published January 2012, it chronologically fits between Unbelievable and Wicked, a Winter/Holiday Break, that no one has ever heard of, and showing how the second A begins their reign of terror on the girls; acting almost as a transition between the first four novels, and the second four.

This is also the largest Pretty Little Liars book currently in the series. Emily, Hanna, Aria, and Spencer are all featured on the book cover.

Rewind to junior year in Rosewood, Pennsylvania, to a winter break no one has ever heard about...

Fat snowflakes fall onto manicured lawns, quilted stockings hang over marble fireplaces, and everyone is at peace, especially Hanna, Emily, Aria and Spencer. Now that Alison’s murderer is in jail and A is dead, they can finally relax. Little do they know there’s a new A in town...

Rule number one of being an effective stalker: Get to know your prey. So I watch these liars day and night, keeping an eye on the trouble they get into, the messes they make, and the secrets they keep. Hanna’s desperate for a very personal session with her gym trainer.Then some pigs got pregnant. Emily is number one on Santa’s naughty list. Aria’s old flame from Iceland is about to land her in hot water. And Spencer’s resorting to some backhanded tactics to get what she wants.

Spencer: Spencer and her family go to Nana Hastings' mansion in Florida, and Spencer falls in love with a tennis player named Colin at the country club. Melissa seems to be helping Spencer win Colin's heart, but Colin ends up taking an interest in Melissa. During the trip, Spencer and her mother also run into Mrs DiLaurentis several times, and Spencer is confused by her mother's strange behavior around Mrs DiLaurentis. Spencer also decides to fight for Colin. After Colin dumps Melissa to go out with her, Spencer discovers he actually has a wife and child, and he is 33 years old. Spencer and Melissa decide to team up to get revenge on Colin by putting crushed Viagra in his Aminospa vitamin water right before his important tennis game. In the end, they all have a fun vacation, but Spencer worries that someone has been following her.

Emily: Emily is asked to go undercover as Santa Claus at the new mall, in order to catch 4 girls who work as elves there, who are suspected of vandalizing Christmas decorations around town, including Emily's mom's baby Jesus ceramic figure. The 4 girls, who call themselves the "Merry Elves", take a liking to Emily, and it is revealed that one of the girls, Cassie, was close with Alison. Emily accompanies the girls on their biggest prank yet, but Emily's mom uses her phone to track her, and the Merry Elves get caught. Eventually, the elves forgive Emily after she bails them out of jail. In the end, everyone realizes the true meaning of Christmas, but Emily can't shake off the weird feeling that someone is following her.

Hanna: Hanna joins a boot camp after thinking she gained too much weight at a holiday party. She develops feelings for the instructor, Vince. She also develops a rival, Dinah Morrissey, another girl who also likes Vince. After competing for Vince's affection, she and Dinah become friends after catching Kate making out with the mall's new Santa (prior to Emily), something which Hanna photographs. After agreeing to stop chasing Vince, she celebrates by going out for drinks with Dinah, where Dinah admits she knew Alison. Hanna goes home drunk, causing her to oversleep. As she arrives at boot camp, she sees Vince and Dinah kissing, revealing that Dinah only pretended to be friends with Hanna to have Hanna let down her guard.Hanna flees the scene, devastated, and is confronted by Kate, who, after receiving a tip-off, followed Hanna around, taking unflattering photos of her at boot camp, which she threatens to put on Facebook. Hanna counterattacks by showing Kate the pictures of her and Santa, causing Kate to back off. Hanna also improves her relationship with her father, who gives Hanna her grandmother's Cartier locket for Christmas. Hanna has a happy Christmas, despite the fact that she thinks someone other than Kate has been watching her every move.

Aria: Aria goes with her father and Mike to Bear Claw Resort, but leaves to go back home after finding out that Byron invited Meredith along as well. Upon arriving at home, she is surprised by her boyfriend from Iceland, Hallbjorn. Hallbjorn tells her that he's running from the Icelandic police who are after him because he protested against the demolition of a puffin sanctuary. Unfortunately, his travel visa only lasts for a week. Aria proposes the idea of marrying him, and the two head off to Atlantic City to get married. At the hotel, they attend a magic show involving two panthers, which angers Hallbjorn, who cares a lot about the environment. After getting married the following day, which requires Aria to forge her mother's signature and lie about her age, they go to the place where the panthers are kept. After convincing Hallbjorn not to release the panthers, they go back to the hotel. The next morning, Aria wakes up to find Hallbjorn gone and his clothes missing as well. On the lobby's TV, Aria sees that Hallbjorn released the panthers after all. Aria goes to the courthouse and confesses to forging Ella's signature, making the marriage null and void. Upon returning to Rosewood, she is joined by Mike and Byron, who know nothing about her marriage. As they watch TV, it shows that Hallbjorn has been caught, and it also shows that he has done these things in the past, including trying to blow up a demolition office. Aria is satisfied with breaking up with him, but is paranoid about someone following her.

The book ends with a sign-off from the new "A," (as always) who says that the Liars' lives are going to get a lot worse now that there is a new "A".

1. All Emily Wants For Christmas

2.Away In A Manger 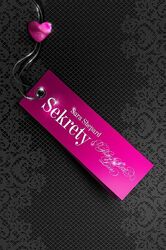 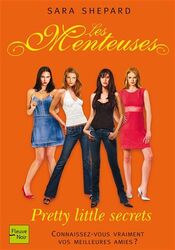 French Cover
Add a photo to this gallery

Retrieved from "https://prettylittleliars.fandom.com/wiki/Pretty_Little_Secrets?oldid=1009697"
Community content is available under CC-BY-SA unless otherwise noted.