- Hired Alison with an ulterior motive

Professor Fielder is a minor character in the television series, Pretty Little Liars: The Perfectionists on Freeform. She is portrayed by Dana Millican.

Fielder is a short woman in her mid-forties with shoulder-length curly blonde hair. She has green eyes and a curvy figure. She was seen wearing professional attire.

Professor Fielder is seen in an office area with Alison DiLaurentis. Alison is interested in switching her major to psychology and wants to study under Fielder. Fielder hires Alison as her new teaching assistant, which elates Alison.

That night, Fielder is leaving Beacon Heights University and is speaking on the phone to an unknown person. She looks around and states that Alison "was in" even if she didn't know it yet. 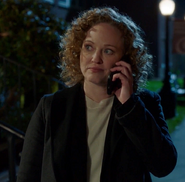 Retrieved from "https://prettylittleliars.fandom.com/wiki/Professor_Fielder?oldid=1020990"
Community content is available under CC-BY-SA unless otherwise noted.