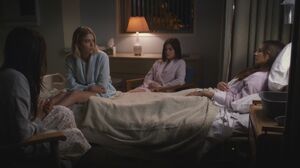 Rosewood Community Hospital is a hospital in the town of Rosewood. The hospital has many wings, including a morgue in the basement. There are candy-stripers associated with the hospital who serve as volunteers.

There's No Place Like Homecoming The outside of the hospital was seen when Toby dropped Emily off from her homecoming date. Moments Later Despite the Marins' financial woes, Ashley splurges on a private room for Hanna, where she is dream-visited by Alison as well as paid real visits by Noel, "A," Lucas and Mona. For Whom the Bell Tolls Melissa and her fetus were being observed there after the car accident with Spencer.

Save the Date Wren gets a residency at Rosewood Community which means he is coming back to Rosewood. In the same episode, Emily suffers from an ulcer which lands her in the hospital. Here, Emily also learns that A has been tampering with her muscle cream and has been putting HGH in it, risking her future and possible scholarship to Danby. Aria and Spencer dress as candy stripers to break into the hospital morgue when they aren't visiting Emily. While there, they steal Alison's autopsy report. When the girls leave, someone unknown moves from his/her hiding place on one of the cadaver beds. Surface Tension Emily, Spencer, and Hanna return to don candy striper outfits once more and pay another visit to the morgue to search for Page 5. The Blond Leading the Blind Toby is visited by Spencer, Emily, and Jenna, while being treated by Wren for his broken arm. Toby is also told by Emily that Spencer cheated on him at the hospital. After Wren himself tells Toby what happened between him and Spencer, Toby packs to leave the hospital and Rosewood. Eye of the Beholder Jenna and Toby visit the hospital for an appointment and run into Wren. Jenna is admitted to the hospital after she is rescued by Hanna from the fire in DiLaurentis House. Spencer was also hurt and Wren treats her.

That Girl is Poison Hilary Reynolds is transported to the hospital. Spencer later goes in her room and finds Garrett's note with 'April Rose' written on it. The Remains of the "A" Hanna and Spencer go back to the hospital planning to expose "A". They decide to replace Garrett's note with the fake one to beat "A" in his/her own game. While Hanna is planting the note, Mrs Reynolds' heart stops beating. Hanna and Spencer rush out of the hospital. The Lady Killer The Liars go to the hospital after Caleb is shot by Lyndon James, waiting to hear further news about his condition. Veronica Hastings shows up to tell the girls that Garrett has been acquitted for Alison and Maya's murders. She's Better Now Byron tells Aria that he took Meredith Sorenson home from the hospital after she was harmed in the fire in the storage shed in front of Rosewood High. What Becomes of the Broken-Hearted Jason ends up in the hospital after an elevator accident. Emily texts Spencer, Hanna and Aria to tell them.  A nurse later comes up and asks Emily where her friend went. The girls rush in and find that Jason's bed is empty and all the tubes and wires he was hooked up to have been disconnected. Out of Sight, Out of Mind Aria is babysitting Ezra's son Malcolm Cutler when he falls of the bed, and hits his chin, after jumping on it. She takes him to the hospital where Ezra and Malcolm's mom, Maggie Cutler, arrive shortly after. I'm Your Puppet Emily, Hanna and Aria sneak into in the morgue again posing as candy stripers. While Hanna and Emily go inside, Aria catches sight of Red Coat. Aria follows her, almost catching her before she slips into the elevator and escapes.

Songs of Innocence Aria, Emily, Hanna, Spencer, Mona and Sara Harvey are brought to the hospital to recover after being rescued from A's Dollhouse.

Melissa in the hospital 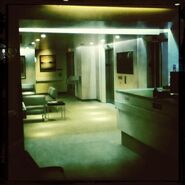 Jenna in the hospital

Jason in the hospital 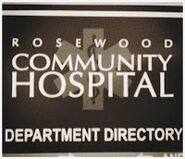 Rosewood Community Hospital (daytime)
Add a photo to this gallery

Retrieved from "https://prettylittleliars.fandom.com/wiki/Rosewood_Community_Hospital?oldid=898368"
Community content is available under CC-BY-SA unless otherwise noted.