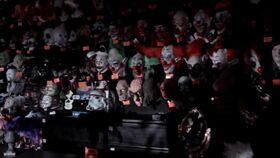 The Rosewood Halloween Spooktacular Store is a store located in downtown Rosewood. The store stocks dozens of unique costumes, masks, makeup, and some props that people can also order in from online. Most Rosewood residents do their Halloween shopping at this store.

Shana Fring briefly worked as a sales clerk at the store before her death.

In "The First Secret," Alison shops for a Halloween costume. Noel startles her, wearing a scary mask. Alison is ruffled, but not upset. She then spots the new girl in Rosewood, Jenna, buying her one costume - a "Lady G." costume. She tries to intimidate her to buy a different one, declaring that that is her own costume choice for this year. Jenna noncommittally agrees to think about changing her decision but turns her attention away from Alison. The girls introduce themselves, then, after Alison walks away, she gets an anonymous text that says "I’m watching you" from a blocked number. She looks around for the perpetrator, finds no one, then as she turns back around, a person in a zombie-baby costume is standing there, startling her once more.

In "Hot Water", Paige, Hanna and Emily come here to find out who bought the costume Queen of Hearts. While Paige and Hanna Shana distracted, Emily searches the computer for clues.

In "A ReservAtion," "A" leaves a voicemail about picking up his or her Halloween costume.

Cece and Jason have an argument in the store in "A Reunion." Shana is working as a sales clerk.

In "I'm A Free MAn," Noel and Shana talk and flirt in the store, then Garrett appears and questions Noel about Jenna's whereabouts, while Shana is secretly listening in. Afterward, Shana calls someone and begins to tell the person what she overheard.

In "TrAde Off," Shana meets Lucas and they learn they share similar interests. Later, Lucas gets a mysterious phone call from someone, and then follows a person in a zombie costume into the dressing room to make a trade. Shana, as usual, witnesses at least part of the exchange.

In "AssociAtion," Shana is texting on her phone then puts it down on the counter and walks away. We then see her messages, her missed calls, photos she has taken and a list of songs.

"A" hides in the store in "CAll Security," and after Shana closes up and the security guard leaves, the hooded figure copies all of the video footage from the security camera onto a flash drive, and then deletes the original videos.

Retrieved from "https://prettylittleliars.fandom.com/wiki/Rosewood_Halloween_Spooktacular_Store?oldid=1022131"
Community content is available under CC-BY-SA unless otherwise noted.