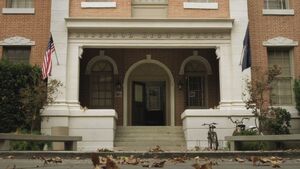 Rosewood High School is a public high school in Rosewood, Pennsylvania. It appears to be a state-of-the-art school with several facilities.

Rosewood High features a variety of extra-curricular activities and clubs, including:

Most of these can be identified in the Season 2 episode "Touched by an 'A'-ngel".

1/21
Community content is available under CC-BY-SA unless otherwise noted.
Advertisement