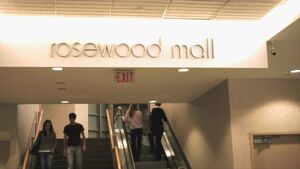 Rosewood Mall is the local mall in Rosewood. It is first seen in Pilot when Hanna and Mona go shopping together. They have both shoplifted from the mall on a few occasions, and Hanna has been caught.

In the "Pilot," Hanna steals a pair of designer sunglasses, while her friend Mona steals a scarf. Hanna also sees Spencer buying new clothes there just before school starts. At the exit, the security guard stops her, which startles Hanna, but it's only to give Hanna her bag, which she forgot inside.

Hanna and Mona go shopping here in "The Jenna Thing." On their way out in the parking lot, Detective Wilden approaches them to grill Hanna. Mona makes a comment, gesturing towards their many shopping bags, about how Hanna actually purchased the merchandise this time.

Hanna goes shopping in "It's Alive," presumably at the mall, in order to avoid attending therapy.

In "A is for A-L-I-V-E," Hanna and Mona arrive with shopping bags in Hanna's House. It is highly likely that the two girls were shopping at the mall.

In "Thrown From The Ride" we see a pan of a mall after we see Hanna trying on clothes when she looks at the price tag she takes it off and steals the item.

Hanna near the exit point

Retrieved from "https://prettylittleliars.fandom.com/wiki/Rosewood_Mall?oldid=1012656"
Community content is available under CC-BY-SA unless otherwise noted.