Sashay is the real-life pairing between Shay Mitchell (Emily Fields) and Sasha Pieterse (Alison DiLaurentis). They are close friends in real life but tend to be somewhat flirty over social media, primarily Twitter. Additionally, they both are heavy shippers of Emison, the romantic relationship between their respective characters.

They have a very positive friendship and are often seen publicly supporting each other on all of their respective projects, be it on social media or in public. They are also both publicly supportive of their characters' relationship, Emison, and the fan base that the ship has.

Sasha and Shay first met during the audition process for the show. They did their first screen test and became friends afterward. However, Shay openly admits that it was awkward for the first couple of seasons when the pair had to do kissing scenes, primarily due to Sasha's age at the time - Sasha was twelve-to-fourteen during the shooting of the first season, while Shay was twenty-one.

As the seasons of the show went on, they grew closer and became close friends, especially when Sasha was able to be on set more. They then became advocates for their characters ship, Emison, often supporting the ship referring to it as, "#EmisonEndgame", "#EmisonFamily", and much more on social media. They pressed for official Emison merchandise and were able to release Emison sweatshirts and shirts directly to the fandom for a limited time.

In 2017, Shay had Sasha on her YouTube channel for a two-part, "Emison Q&A". It was one of the most requested videos for her to do, and they even agreed to do a Shaycation together one day.

The girls were sent an Emison box from a group of Emison shippers, which they opened together in a car. They have since taken turns with the box to read the letters and properly go through it.

When Sasha became a contestant on Season 25 of Dancing With the Stars, Shay proudly watched every episode and publicly supported Sasha throughout the competition. Shay also posted her pride for her friend on social media accounts, often showing her love and support. She planned to attend the competition live when she was in town, but unfortunately, she was never able to attend.

Sasha and Shay have been very active on social media, almost always sharing their love and support to one another, and responding to fan questions about each other. They use social media as a way to stay in touch with each other when they are traveling.

Despite Sashay being active on a number of platforms, Twitter seems to be their preference. They are often interacting (liking, retweeting), tweeting, and responding to one another, and have also been seen tweeting about each other when confronted by fans or just in general.

When the girls are together, they tend to use Snapchat over any other social media. This could be because Snapchat is better for the in-the-moment type of clips, while Twitter and Instagram are better for distance.

The pair is active on Instagram, and often share pictures of one another or clips from the next episode. While most of their Instagram posts are about Emison, there are some that are just about them. 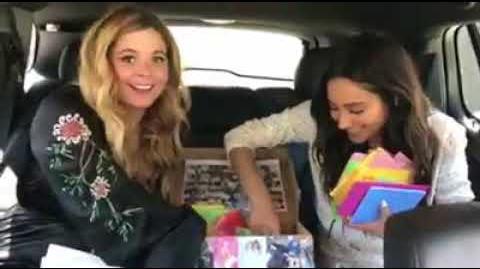 Cite error: <ref> tags exist, but no <references/> tag was found
Retrieved from "https://prettylittleliars.fandom.com/wiki/Sashay?oldid=1022125"
Community content is available under CC-BY-SA unless otherwise noted.