Bethany Rooney
Scream For Me is the eighth episode of Season 5 of Pretty Little Liars. It aired on July 29th, 2014.

The episode opens with Spencer , Hanna , Aria and Emily singing in choir, while Alison is being questioned by Lieutenant Tanner . Tanner asks Alison if she had spoken to Shana before her abduction, Alison tells her that she hadn’t spoken to anyone. Tanner asks Alison if she ever tried to contact Shanna. Alison is confused to why all of her questions are about Shanna instead of Mrs. DiLaurentis. As the school bell rings, Tanner tells Alison that the police have many theories.

The liars ask Alison what her and Tanner were talking about. Alison informs them that it was all about Shanna. Ali then shows the girls her songbook. All of the A's are circled in it. Spencer flips to the end of the book and finds an A note - "Glad to here you singing again, last time you were all choked up -A."

A tired and hungover Hanna is searching through her messy locker. Spencer and Emily walk towards her. They tell Hanna that they are very concerned about her well being and to apologize to Aria for informing Sydney about New York.

At the front of the school, as Aria is giving Ezra an update over the phone, she spots Ella Montgomery walking towards her. They greet each other. Ella asks Aria if she can introduce as her maid of honour at her engagment party. Aria is thrilled and says yes.

In the locker room, Emily tries to do some Hanna damage control by talking to Sydney about Hannah’s drunken confession, saying that Hanna made up being in New York. But Sydney tells Emily that she doesn't recall Hanna mentioning New York. Sydney also accidentally broke the news that Emily was voted the new assistant coach. Emily wasn't as excited as Sydney expected.

Caleb was going to show up for lunch, but slept in, much to Hanna’s dismay. Ali shows up with water but no food. Hanna apologizes for her attitude at Emily’s dinner. Ali's timing was imppecible as she asks to crash at Hanna's since is dad is going out of town.

In Spencer's living room, Spencer and Toby mulled over Bethany’s horrific drawings. Spencer knew this was tough for Toby, considering his past with Radley. Toby reveals to Spencer that he has enrolled at the Harrisburg Police Academy. At first, Spencer chuckles and does not believe him. Toby informs Spencer that he would have access to all of the police reports, he also tells Spencer that it would be quite refreshing to have a police officer in Rosewood that actually cares.

At Radley, Aria asks one of the nurses where she can find Eddie Lamb . The nurse informs Aria that yesterday was his last day. Aria looks surprised and asks how she can reach him. The nurse gets angry and tells Aria to go to the day room. Aria sneaks into Big Rhonda's room to return the sketchbook she stole from her. As Aria puts it back Rhonda walks in . Rhonda tells Aria that she can forget she was here but it might cost her something.

Hanna walks in on Ashley and Alison having a conversation. Alison is telling Ashley how the thought of her family got her through the last two years. Hanna’s mom tells Hanna that Alison will be staying with them till her father returns. She asks Alison to relax and take a hot bath with her bath salts. Ashley is astounded that Ali had stayed so strong despite everything. Hanna’s mom is planning dinner, but Hanna says that she is going to go help Caleb study for his exit exams. Before leaving, Hanna reminds her mom that she asked to use the bath salts a lot of times but was never given to.

Turns out, all Rhonda wanted was a bag of Cheetos and soda. She spilled all about Bethany. Mrs. D. had signed her out multiple times to take her to the circus and to her horse named Custard at some stable. A nurse caught them before she could reveal more. She shouted at Aria for giving Rhonda soda as she is diabetic.

Drunk Hanna got hungry and hit up The Brew. Zack offered to cook her up a tuna sandwich, with a side of heavy flirting. As she left, he definitely put his hand on her back. This turned Hanna off and she left feeling violated. At Caleb’s, Hanna’s started worrying about her skirt length, but Caleb settled the question with an intense makeout session.

Sydney pays Emily a visit at her house and asks if she is going to accept the assistant coaching position. She had a shirt made for Emily that says “Assistant Coach” on it. She mentions something to Emily about when she was in New York, and Emily catches her in a lie. Earlier she had told Emily that she didn’t remember anything Hanna said about New York. She tries to cover her tracks and says her “brain is mushed” from being under water so much.

Ella barges in on Aria at home, and demands to know why she blew off the maid of honor meeting at the bridal shop. Ella thinks that Aria blew it off because she doesn’t want her to get married again. After Aria apologizes, Ella agrees to reschedule the meeting, and warns her not to miss it.

The next morning, a frightened Alison tells Hanna’s mom that someone tried to break in her window and she slept in the closet. Hanna’s mom comforted her and even took the day off to stay with her.

That day in school, Hanna skipped language lab, but walked in hungover after class. She was so hungover that she had a crispy treat in her hair. She started complaining about having Alison as a roommate and she spilled about the weird moment with Zack. Spencer and Emily were a little hesitant about Hanna’s story, considering her current state and the fact that Ella was about to marry Zack.

Spencer and Emily checked out the horse stable to find out more about Bethany. Apparently, Bethany threw a fit and a bucket at Mrs. DiLaurentis after trying to bribe her.

Hanna was still creeped out by her run-in with Zack. Zack took a seat in her car to talk. He was totally into the idea of hooking up with Hanna. He wrote his number down and told her to hit him up. Then, he put his hand on her leg. It was obvious that Hanna felt uncomfortable.

Ashley Marin and Ali discuss dinner plans for the two of them because Hanna was again planning to be absent. She walks downstairs while making dinner reservations on the telephone when she sees the window open. She spins around to see that the front door is ajar as well. There was a man in the house with a knife. Ali and Ashley were frightened, and he bolted once Hanna’s mom dialed 911. Detective Tanner shows up at the Marin house. She questions Alison and Ashley. While Tanner is giving Ali the third degree, Ashley interrupts and tells her to stop treating Alison like a criminal instead of a victim. Hanna headed to Aria’s soaking wet to tell her about Zack. She confessed that Zack wanted to hook up with her. Aria didn't go for it. “You’re the problem, Hanna.” she screamed. “You’re always the problem.” Aria didn't believe a word of Hanna’s story and wasn't going to let her self-destruct and bring her mom down too.

At the stables, Spencer discovered Melissa’s riding helmet, causing Spencer to want to dig some more. She got that opportunity when someone locked them in the stall! The horse in the next stall over was freaking out and even hit Spencer as they tried to escape. Later, Toby stopped by Spencer’s to check on her. Toby tells Spencer he is extremely tired of feeling so powerless. Spencer apologized for dissing Toby’s decision to join the police force. Considering the recent turn of events, she was all for it.

After Hanna revealed about Zack getting a little close to her, Aria watched Zack like a hawk. Is she starting to believe Hanna?

Ali packed up a few extra things at her house to take to Hanna’s. Spencer and Emily were freaking out about the break-in, but there was no reason to worry. Ali had Noel Kahn break in Hanna’s house. “I needed someone who mattered, to stop questioning my story” Ali said about Hanna’s mom. The episode closes with a backed hooded figure walking through a room that would appear to be Spencer's, touching the riding helmet and flipping up a hidden panel under a couch cushion. 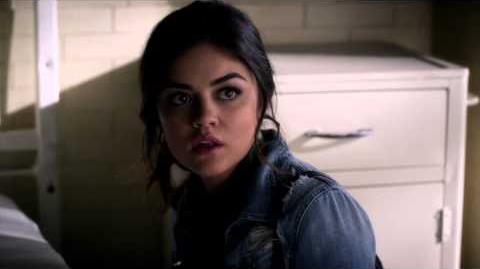 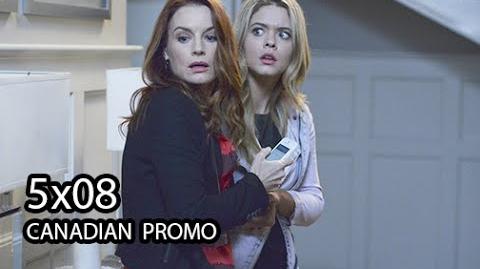 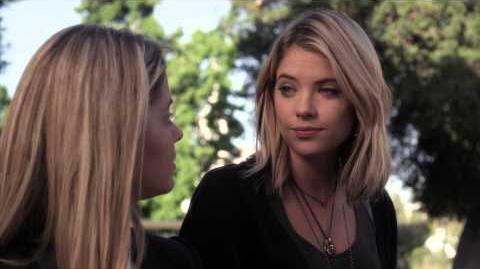 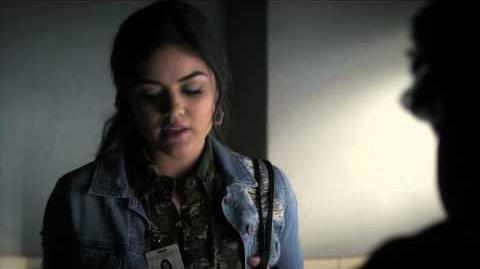 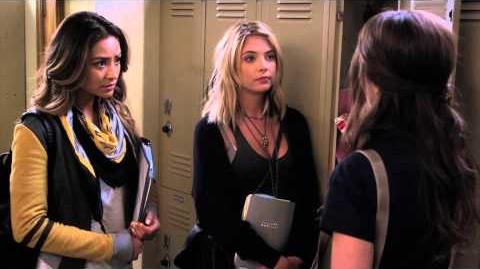 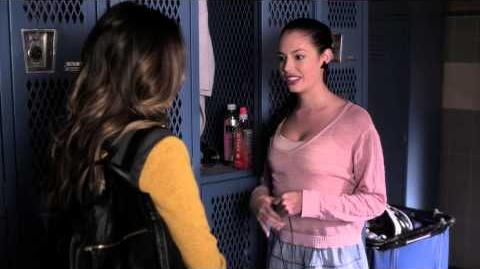 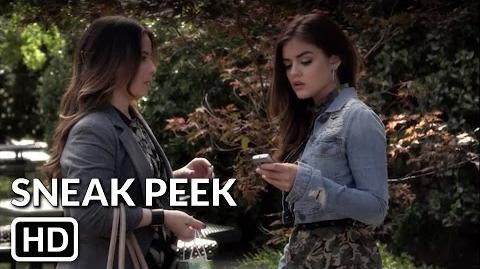