Never trust a pretty girl with an ugly secret.

Rosewood is a perfect little town with a great many secrets, the ugliest of which belong to the four prettiest girls in town: Aria, Spencer, Hanna and Emily, friends whose darkest secrets are about to unravel. One year ago, Alison, the Queen Bee of the group, disappeared, and the girls stopped being each other's BFFs. Now they start getting messages from "A" saying things only Alison would know. "A" spills their secrets, watches their every move and makes some very scary threats. The girls reunite to discover what's going on: Is Alison back or is "A" someone else altogether? Share the mystery with the complete Season One of the enthralling new series based upon the New York Times bestselling series by Sara Shepard.

Spencer is a perfectionist and straight-A student whose pressure to stand out in her overachieving family leaves her feeling alone...until she finds understanding in the unlikeliest of places - the arms of her sister's fiancé.

Emily, an athlete trying to sort out her place in the world, finds herself drawn to her new neighbor, Maya(Lawson), a free spirit who recently moved into Alison's old house across the street.

Once-chubby Hanna has transformed herself into the current "It girl," but still battles the urge to binge. Shoplifting gives her a less-fattening thrill, but when she gets caught, the charges are dismissed only because her mother, Ashley(Leighton), takes matters into her own hands, eager to keep her own reputation and the image of her daughter untarnished.

Artsy and electric Aria has just returned to town from a year in Europe and, while she tries to deny feeling hurt over her father Byron's (Lowe) indiscretion with one of his ex-students at the college, and keep her mom, Ella (Combs), from finding out, she can't ignore the intense chemistry with Ezra Fitz (Harding) - Aria's English teacher. 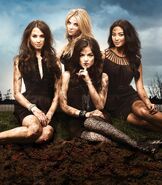 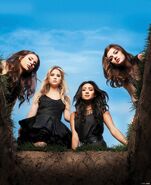 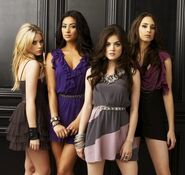