Time to bring your A game.

Season 3 takes place five months following the discovery that Mona Vanderwaal was the elusive "A" that had been creatively and relentlessly tormenting the four main characters, Aria Montgomery, Spencer Hastings, Hanna Marin, and Emily Fields for the past year. The first half of the season addresses the issue of whether or not Garrett Reynolds actually killed or was involved in the murder of the girls' former friend and queen bee, Alison DiLaurentis and who killed Maya St. Germain in the season two finale, while the second half deals with the reveal of another "A" and the fallout while the mysterious Red Coat stalks the girls.

After losing Maya and finding Alison's grave empty, Emily continues to struggle with her loss during her senior year. She is more motivated then ever to find answers about Alison's killer and still just barely hoping that Maya might still be alive. Emily is not miss perfect anymore, having spent her summer heavily partying and drinking. Emily has a job at Rear window brew and Emily finds some solace after meeting Maya's cousin Nate in "Birds of a Feather,".

Hanna is determined to find answers about Alison's death by visiting Mona at Radley Sanitarium. She continues to hold a relationship with Caleb while also overcoming Mona's betrayal. She is also growing closer to Wren who works at the Radley Sanitarium. Caleb doesn't approve of Hanna's visits to Mona, so he threatens Mona to leave Hanna alone. Later in the season, Hanna and Caleb break-up. Hanna is also accused of stealing Alison's body by Officer Wilden. Hanna and Caleb later get back together and continue their relationship secretly so "A" wouldn't mess with it.

Aria's romance with Ezra continues to plague her relationship with her family especially her father. Like the rest of the four, Aria is just as determined to find more answers. Since the end of season two, Aria's parents have separated and her mother has moved out. Her mother, Ella, says that it wasn't Aria and Ezra's fault, but more the fact that they married young and grown apart. Aria's father starts to date Meredith and as a result, Aria puts up a dating profile for her mother on an online dating website. 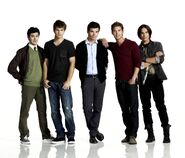