Season 4 begins immediately where Season 3 left off. Pretty Little Liars was renewed by ABC Family on October 4, 2012. Production began in mid-March 2013 and ended in early November 2013.

It consisted of 24 episodes, aired on/off between the summer 2013 and the spring 2014. It briefly returned for the annual Halloween PLL Special episode in October 2013, and resumed new episodes in January 2014.

After the fire at the lodge, Spencer and Toby are back together but "A" tries to split them apart when "A" tortures Toby about his mother's death, and Spencer helps investigate Marion's murder with him Spencer also interfered when Alison and Emily arranged to meet in "Close Encounters," which enraged Emily. Afterwards, she begins to take drugs to help her with finding out if Ezra is in fact "A", and is sent to rehab for her drug addiction Then later in the season, Spencer realizes that she thinks she tried to kill Alison, having flashbacks of the night Ali went missing and hitting her with the shovel, but it was revealed that Spencer did not up end hurting anyone.

Emily is having a hard time with knowing if Ali is alive or not. Due to a recent injury that "A" caused that affected her shoulder and made it so she wasn't able to swim, and when she takes medicine out of her mother's medicine cabinet which makes her drowsy and causes an injury during a swim meet which put her out of action. It gets worse when someone calls Family Services on her parents to try to make them lose her but it ended up not happening. Later on, her mom gets suspended from work because Emily steals a key from her mother's desk at work to sneak into Wilden's place with her friends, and the police department isn't able to find the key; so they end up blaming it on Pam Fields Shortly after, a car goes through her house which left her and her mother no other option but to rent a motel until shortly after, Jessica DiLaurentis offers Emily Ali's old room to stay in temporarily She takes her up on that offer but eventually leaves and live with Spencer because it was just too creepy

Hanna is feeling the after-effect of the fire, swearing that she saw Ali and wondering if she can trust Mona or not. After Spencer finds Hanna's mom's cell phone in Wilden's casket, she start to worry about her mother and starts to get suspicious that her mother may have killed Wilden. Hanna mom comes home and it's a bittersweet homecoming since Hanna thinks her mom may be a killer. She finds evidence such as a pair of muddy high heeled shoes and a gun in her mother's bag. Her mother gets arrested and sent to jail, which makes everything go wrong for Hanna.

Now broken up with her boyfriend Ezra, Aria needs to find away to move on. After almost being run down by "A", she decides to take a karate class where she finds a cute karate instructor named Jake, and they develop a crush for each other. In the end of an episode, Jake is seen with punching bags and falls to the ground when someone puts knives in his punching bag. It's a struggle for Aria when she finds out that Ezra was also dating Alison before her and he was only using Aria to write a good crime novel about Ali. 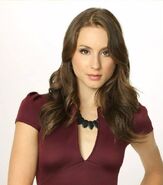 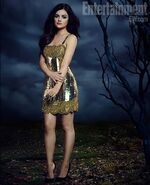 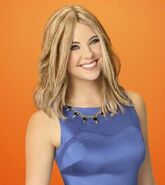 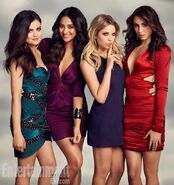