Shadow Play is the nineteenth episode of Season 4 of Pretty Little Liars. It aired on February 11, 2014.

Spencer, Hanna and Emily are in Ezra's classroom looking for some kind of evidence they can use to prove to Aria who he really is. Emily tries calling Aria but she gets no answer. Hanna is concerned about what they will tell Aria even if they do find her. Emily comments that she would like to know more about Ezra before telling Aria anything.

Spencer finds a package containing Alison's journal in one of his desk drawers. They get out of the classroom and hear the sound of high heels approaching. They hide in the hallway and spot Mona walk into Ezra's classroom. She comes out with a stack of papers.

Back at Spencer's place the girls look through the journal. Hanna tells Spencer that they should move to Spencer’s room but Spencer says to Hanna that her parents are out of town and so they have nothing to worry about. Spencer says that she does not think any pages are missing. Her constant sniffing prompts Hanna to ask if she is getting a cold. Spencer says that it’s allergies. They want Emily to ask Paige about Shana. Emily wonders if perhaps they found the journal too easily like A wanted them to find it.

Aria and Ezra are together in the car. She tells him about a story she's working on and they talk about heroes and villains.

Spencer sits at home watching old movies and takes a pill. A gunshot is fired in the film and Spencer looks away. When she looks up everything around her is black and white. Even the costumes are dated back to the 1940s. Toby walks in wearing a trench coat looking like an old timey detective. Toby asks her about the drugs she's taking. Spencer says that she does not know what Toby is saying.

Ezra approaches Spencer at the coffee shop and pays for her coffee. He asks her about returning to the Hart and the Huntsman and Spencer says that she did not go to that place since she saw him there. Ezra offers to take Spencer there for lunch or dinner. Spencer promises to let him know what will be good for her.

The girls talk about the likelihood that Aria is probably still with Ezra and lying about it in the girl’s bathroom. Hanna is put in charge of watching Ezra.

Aria arrives and the girls ask about her trip. Spencer asks her if she went to the Erie Canal Museum and Aria says that she couldn’t as it was closed. Aria asks what she missed and Spencer says nothing much. Aria leaves as the bell rings.

Spencer calls a number and reaches the Fitzgerald Art Foundation. She hangs up without leaving a message. Spencer takes another pill and is then confronted by Toby again about the pills. He tells Spencer that the pills will not help her piece the evidences together. Toby notices a painting of Alison on the wall and asks Spencer when that got there. Spencer says that she has no idea. They talk about the possibility of Ali being alive. Toby thinks Spencer is trying to tell him something but Spencer says that she is just asking.

Hanna watches Ezra and Mona on the balcony outside his apartment. She hands him a drink and they go inside.

Emily asks Paige about Shana. She says she told her everything. After their talk is over, Paige tells Emily that she will always leave first as she cannot bear the sight of Emily walking away from her.

Hanna runs into Mona on the street. Mona asks Hanna if she lost something. Mona calls Spencer and tells her there's a "blonde package waiting for you" at Ezra's apartment. Spencer rushes there and Ezra confronts them about tailing him. He says he's back with Aria, to which Spencer warns him to stay away. He thinks they haven't told Aria about him because they aren't sure and tells Spencer she's in over her head. In the car Spencer tells Hanna the number from Alison's journal led her to the art foundation.

Aria and Paige have a conversation about an old camera. Paige tells Aria about going on a canoe trip with Emily. Aria tells Paige about the time she was like a tomboy and how she eventually lost interest.

Ezra has a drink with Toby. He tells Toby that Alison is alive and that Spencer knows how to find her.

Alison shows up at Spencer's place wearing the same dress as in the portrait. She comments that the painter did a wonderful job. Spencer asks Ali why she did not tell them about Ezra, but Alison is just concerned about the portrait. She says that the portrait will always look the same but Ali won’t. Spencer asks Ali that why she did not warn Aria. Ali says that no woman has ever been able to warn another woman about a man. Spencer asks Ali if she can get one straight answer from her. Ali says what would be the fun in that. Spencer tells Ali to stop her drama. Ali says maybe Spencer should be the one she is afraid of. Ali says that Spencer has all the pieces and maybe she needs help from the pills to put all the pieces together. Spencer runs to grab her pill bottle but all of the pills fall into the sink hole. Spencer desperately tries to pick them up but Toby arrives and asks Spencer to snap out of it.

Toby sits Spencer down and asks whether Alison is alive or dead. He wonders if perhaps Spencer was helping Alison. Aria tells Ezra she wants to tell her friends about their relationship. He tells her that he knows Alison is alive.

Emily promises Paige she won't let her be alone. They're both scared about being found out. They sleep together.

Hanna calls the Foundation's service looking for a message from an "Alison."

Spencer tells Toby she's not sure who A really is. Toby tells her she knows the next step to find Alison. He thinks it's no accident that she has Alison's book.

Aria tells Spencer she's seeing Ezra again. She says she loves him, but seems conflicted about how things are going. Spencer is about to tell her about Ezra but Hanna interrupts to say she's found Alison.

The girls go the place where the message from Alison originated and find her. She tells them to "get the hell out" and rips into Spencer for bossing everybody around. Spencer responds by charging her with trying to set them up. Alison asks Aria "has she told you?" just before a bullet comes through the window. Everybody scatters. Downstairs they hear Ezra's voice. He says "I don't know what they told you but it's not true." Nobody will tell Aria what is going on and she goes to him. When she gets there it is Toby, who says he knocked out Ezra. They get in a car and speed off.

In the car Aria asks Spence why Toby hit Ezra. Nobody has the courage to say anything. Toby asks Spencer about the Alison's book and they argue. He tells her to look at the pages themselves. Spencer says that it is the same thing and starts looking at the pages. That’s when a light appears in the front window of the car causing Spencer to snap back to reality.

Spencer snaps back into "real life" and we learn that all the black and white events were just Spencer’s imagination. She goes over to Alison's book. Emily and Hanna arrive and tell her it's a Trojan horse. There have been changes made to the journal from the pictures she took. A doesn't realize they have the original pages on Spencer's phone, which means the girls have the upper hand once again.

The girls go to Aria's place. The episode ends with them looking through the window and seeing Ezra and Aria kissing. 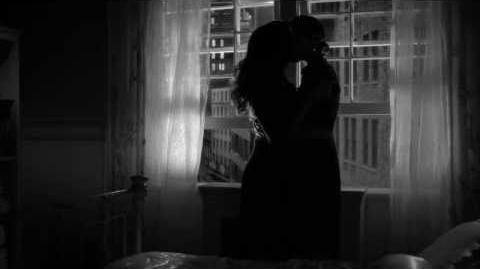