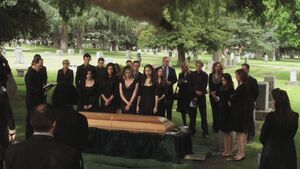 Shady Pines Cemetery is Rosewood's local cemetery. This is where Mrs. Esther Marie Potter, Bethany Young, and Ian Thomas are buried. It is first seen in "The New Normal."

The black-gloved figure is mysteriously seen putting flowers on the grave of Mrs. Potter in "The New Normal."

The girls help bury Ian here in "The Devil You Know." Ezra comes to offer emotional support, but his refusal to show physical affection doesn't satisfy Aria. Rejected, she goes to Jason instead, who confides in her that until Ian's death, he had wondered if maybe he had killed his sister. At the end of the episode, "A" sends Emily, and by extension, the other girls to Alison's grave in order to screen the remaining footage of the Kissing Rock video using a hidden projector and the side of a tomb.

In "It Happened 'That Night'," the girls fall asleep at Spencer's house after drinking and discussing their recent trauma, then someone leads an intoxicated Emily to Alison's grave. It has been dug up and her body is missing. The girls come to the cemetery to find out what happened, but Emily has no memory. Spencer tries to look at Emily's call history and sees that got 2 calls that night: one at approximately 11PM from a blocked number and another at around midnight from Spencer's phone. They realize they are being set up and get rid of any evidence they were there that night. The vandalized grave is reported to the police but there are no leads, when the girls realize they're safe they vow that the night never happened. Someone, "A," was watching them this night though, and has photos of them standing over the open grave and burying the incriminating shovel. In the mid-season finale, "The Lady Killer," Spencer, Aria, Hanna, and Caleb are lured back to Ali's graveside by "A," aka Mona, as part of a plot to frame Paige for Maya's murder. However, Paige was kidnapped before she could get to the cemetery. The girls think that they may have fell for into another trap and that Paige never planned to show up, so they leave, hoping to get to Emily before Paige finds her first. In "Dead to Me," Alison is entered in a mausoleum after her body is found. Later we see Spencer gazing at the tomb of Toby's mother and carves Toby's name on it.>

The mausoleum made a great projector screen

Retrieved from "https://prettylittleliars.fandom.com/wiki/Shady_Pines_Cemetery?oldid=867706"
Community content is available under CC-BY-SA unless otherwise noted.