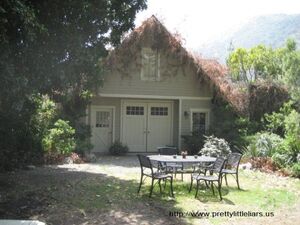 The Hastings Residence is located at 23 Bridgewater Terrace.

The nicest of all the Liars' homes, Spencer's estate comes with a pool and a barn that has its own full bath. It seems to have once been a farm house (something explicit in the books, but not the TV series). Nicknamed "The Hastings' Manor" by Wren Kingston.

Spencer's house is next to Alison's, as shown in Pilot, when Spencer is able to look into her room.

Melissa and Wren move into the barn in the first episode, despite the fact that Spencer's parents had promised it to Spencer for her junior year; Melissa makes claim to it, as she says her and Wren need privacy. Wren moves out shortly thereafter, but Melissa stays in the barn, nonetheless. The barn is first seen in "Pilot," and it is clear from when it is seen a year later that Spencer had done extensive renovations to the barn during her sophomore year.

In the next episode, Spencer makes out with Wren in her bedroom with the door wide open. Naturally, Melissa sees the exchange and ejects Wren from the barn the next day. Similarly, when Spencer had made out with Ian, she had done it on the front lawn in broad daylight while practicing her hockey swing. Melissa hadn't noticed this one, but Ali had.

Spencer's home is somewhat vandalized by "A" one night when the Liars are together. "A" rearranges a broken flower pot in the kitchen to resemble a tombstone and also plants a tube of lipstick in Spencer's bedroom closet after scrawling a message with that lipstick on her vanity. "A" had planted a video camera inside Spencer's closet, but it is gone when the girls go looking for it.

As of Ian's moving in, Spencer feels less and less secure in her home, though her parents attribute her fear of Ian to jealousy of everything Melissa's.

Police search Spencer's room with a warrant after she becomes a person of interest in Alison's murder investigation.

In Season 2, when someone tries to enter her kitchen unannounced, she brandishes a knife, out of fear for her trespasser's intentions; then Toby reveals himself. Spencer's home gets broken into by Mike, who breaks the window and flies out violently, pushing Aria when she tries to investigate.

In "Grave New World" after Alison flees to Ravenswood in front of their friends, Ezra drives the four girls back to Rosewood. Unexpectedly they are observed by Alison, when Aria and Ezra adopted by the other three. They eventually discover Alison in red coat and she runs away from them. In Spencer's garden they finally stop and ask for Alison. Alison turns around and asks her if they missed her. As Ezra shows up unexpectedly to give Aria's mobile phone which she has forgotten, Alison is gone.

In "EscApe From New York" the Hastings family excluding Spencer discuss in the kitchen about Alison being alive. Melissa thinks that Alison is behind all the mess that Spencer has gotten herself into. Veronica decides to hold her judgment until she learns all Alison has been through when she went missing. Melissa wants to tell her mom something but is interrupted by the arrival of Officer Holbrook who tells them that CeCe Drake escaped police custody. Later that night, Peter tells Melissa that her mother must never come to know about the secret she told him.

Spencer's room reflects Spencer's personality. It has very classic pieces, such as her antique standing oval mirror and the canopy style bed. She has a cork board with past diplomas and awards displayed on it. Her desk is covered in trophies, and she has many books. She has a four poster bed and a computer on her desk. She also has a red chair for lying down on. She had an opening doors wardrobe. In Welcome to the Dollhouse, A manages to completely recreate her room. Spencer's room will be seen for the last time in O Brother, Where Art Thou.

Rachel Kamerman, set designer for Pretty Little Liars, has said that the backstory she went with in creating Spencer's house is that it represents old money, being in the Hastings family for a very long time. She says she played off of Spencer's love of design, her preppiness, and her conservative burberry-esque personality. The wallpaper in Spencer's room was flown in from England and is one of the most expensive pieces on the set; Kamerman wanted to make the Hastings' economic status very clear via the opulent piece.

The childhood pictures of Spencer are really of Troian Bellisario when she was younger.

Retrieved from "https://prettylittleliars.fandom.com/wiki/Spencer%27s_House_and_the_Barn?oldid=1024410"
Community content is available under CC-BY-SA unless otherwise noted.