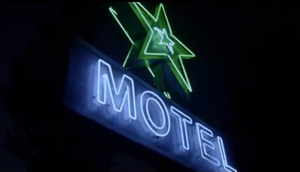 The Star Motel, featured in A DAngerous GAme, is where Toby and Spencer spent a night together. This was also one of Toby's multiple hideouts for an unknown amount of time.

After Toby found out Spencer was on The A-Team at the diner, Toby asked Spencer to follow him to one of his secret hideouts that Mona or Red Coat didn't know about. Once they were both there, They went to Tobys room and later had sex. The Motel has not been mentioned or seen on the show since Season 3.

Retrieved from "https://prettylittleliars.fandom.com/wiki/Star_Motel?oldid=999941"
Community content is available under CC-BY-SA unless otherwise noted.