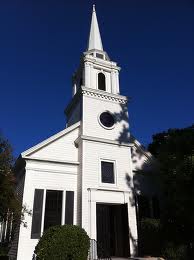 The local church of Rosewood is the primary church in the town and is where most residents attend annual mass and events. The church has been the site of several funerals throughout the series, as well as, one wedding.

Alison DiLaurentis' funeral is held at the church. At the funeral, Aria and Ezra share a second kiss in the stairwell. After the funeral, he Liars also receive their first group text message from A on the steps of the church.

For Whom the Bell Tolls

Melissa leaves her phone here after meeting the minister to plan a christening for her unborn child, Taylor Thomas. That night, Ian tries to murder Spencer by pushing her off the belltower and into the entangling ropes. A masked black assailant attempts to kill Ian here by throwing him into the bell ropes in the tower in an attempt to save Spencer.

The police arrive on the scene of Ian's alleged death, and Spencer tells them what happened. When they go inside, Ian is gone from the ropes with no evidence he was ever there. As the police investigate, the town gathers on the front lawn of the church to witness the speculation.

The Devil You Know

That Girl is Poison

Will The Circle Be Unbroken?

Spencer flashbacks to when she and Alison attended church and saw Mona in the pew over. Mona was singing along happily while Alison made snide remarks about her.

"A" steals the new church bell and replaces it with one of lesser value, to frame Jamie for the crime. It works, and Jamie is ultimately fired.

Darren Wilden's funeral service is held at the church.

Emily goes to the church to drop off a pie for the church bake sale. Inside, Shana Fring sneaks up on her and delivers a message from Alison.

Alison has a violent confrontation with Mona inside the church. Mona catches the encounter on video.

Through a Glass, Darkly

Mona Vanderwaal's funeral is held at the church.

Of Late I Think Of Rosewood

Charlotte DiLaurentis' body is discovered by the Rosewood Police Department outside the window of the bell tower. She is holding purple flowers and the police presume the cause of death to have been suicide. Her funeral is held several days later.

Uber A drags a life-size doll of Hanna across the church floor.

Uber A leads the remaining Liars and Caleb to the church, more specifically, the bell tower. They discover the doll of Hanna strung up as if she were dead and hanging.

Mona flashes back to the night of Charlotte's murder. Mona knew Charlotte faked her therapy and decided to lure her to the church to talk. Mona confronted Charlotte in the church's bell tower in an attempt to scare her. They engaged in a fight which ended when Mona accidentally shoved Charlotte into a sharp pipe and killed her in self-defense.

'Til Death Do Us Part

Aria and Ezra get married in a small ceremony at the church.

Retrieved from "https://prettylittleliars.fandom.com/wiki/The_Church?oldid=1020701"
Community content is available under CC-BY-SA unless otherwise noted.