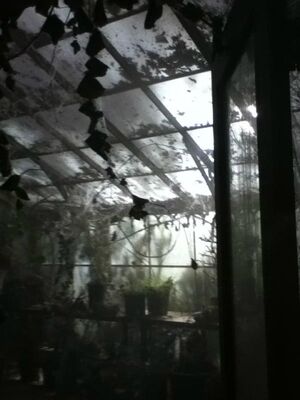 The Greenhouse is an abandoned structure somewhere in Rosewood. The girls went there in Season 2 when they wanted to meet in secret after their separation.

It's Alive When Melissa is receiving texts from Ian on her phone, they go here to discuss the possibility that Ian is alive, since they are supposed to be on a break from each other. It is clear that unbeknownst to them that someone is watching them from above the greenhouse. Through Many Dangers, Toils, and Snares

The girls meet here at 10 PM after school to plan a coup against "A." Emily then returns here the following night to "make a deal" with "A." Meanwhile, the girls are wai

ting as backup right outside to catch "A" when he/she shows up. "A" is caught off guard and tries to attack Emily and the girls. "A" ultimately escapes by throwing a pot through the ceiling, thereby showering glass everywhere and making a run for it.

A Hot Piece of A

The girls return to the greenhouse to find the box they left there and come up with a plan about what to do with A's phone. They flee when more glass falls from the ceiling.

Retrieved from "https://prettylittleliars.fandom.com/wiki/The_Greenhouse?oldid=994335"
Community content is available under CC-BY-SA unless otherwise noted.