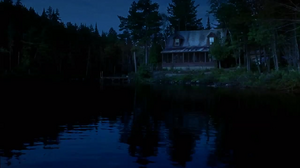 The Hastings' Cabin, also known as the lake house, has a dock, a rowboat, and pier.

The precise location of the Hastings' Cabin is unclear, but it does not seem to be in Rosewood propery.

In "Moments Later," "A" is seen burning the tree trunk bearing the "Alison + Ian" inscription. Later in the series, we are able to confirm this took place in the hearth of the Hastings' private cabin.

In "Save the Date," Hanna takes Caleb to the cabin without Spencer's family's permission; she seeks a secluded spot where Caleb's stalker won't be able to find them. While there, they remove the covers protecting the furniture and ignite the fireplace. It is later revealed that Hanna took Caleb here without Spencer's permission or knowledge. In "A Hot Piece of A," Hanna throws Caleb a surprise party at the lake house. Spencer discovers that "A" had been in the attic and wonders if this is "A's" secret headquarters. In "Let the Water Hold Me Down," Spencer shows the girls the items she found hidden in the attic - a handful of untraceable burner cell phones and a pack of gum. They know that it belongs to "A".

In "It Happened 'That Night'", after Alison's body is stolen from her grave by an unknown individual and the girls are set up to look guilty, the girls go to the cabin to have an alibi. Spencer leaves a note for her mother that says they have been there since that afternoon.

In "March of Crimes" Spencer locks the pictures in a cabinet. While she's there we see something move on a chair covered by a sheet. Spencer spots it to and pulls the sheet back to reveal Noel. He wants his pictures back, pointing out that his car was broken into. Noel says Alison doesn't know he has the pictures. He has them for insurance in case Alison turns on him. Shana sent the pictures to Jenna and Noel broke into Jenna’s house to steal the pictures minutes before the house blew up. When Spencer won't give him the key to the cabinet Noel begins to shout and she hits him in the hand with a fireplace tool. She tells him that they need insurance as well and promises to keep the pictures in a much safer place and shouts at him to leave. He leaves while Spencer then gasps for a breath.

Hanna and Caleb in the Cabin

Where the tree trunk was burned in "Moments Later"

The pier and rowboat
Add a photo to this gallery

Retrieved from "https://prettylittleliars.fandom.com/wiki/The_Hastings%27_Cabin?oldid=908803"
Community content is available under CC-BY-SA unless otherwise noted.