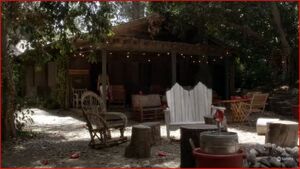 The cabin of the Kahn family, is the one where Eric and Noel's parties are taking place. The cabin is apparently outside of Rosewood, in a large forest.

In To Kill a Mocking Girl, Noel is at one of his "legendary" parties, since his parents are away. The four friends also go there, and Maya. While the party is offset by Sean,and Hanna crashes his car and Maya and Emily pose for some photo,and kiss in a photo booth, but are stolen by "A".

In The Kahn Game, Noel's brother Eric is at the party. Spencer and Aria go to Emily's escort to meet "Steve," the man of UPenn. Jenna is also there. File: A picture Maya had supposedly taken of Noel Khan's cabin, A picture Alison had taken of Maya In What Lies Beneath, its revealed Maya St. Germain was hiding there, when she told Emily she was in San Fransisco. She was hiding here from her stalker-boyfriend from rehab, Lyndon James, who unfortunately found Maya and murdered her.

The big gate in front the cabin 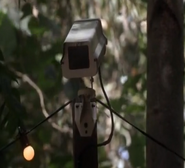 CeCe, Aria and Spencer in the cabin
Https://vignette4.wikia.nocookie.net/prettylittleliars/images/3/36/0314.jpg/revision/latest?cb=20130629233058
The Kahn's Cabin outside.png
Maya
Add a photo to this gallery

Retrieved from "https://prettylittleliars.fandom.com/wiki/The_Kahn%27s_Cabin?oldid=1006123"
Community content is available under CC-BY-SA unless otherwise noted.